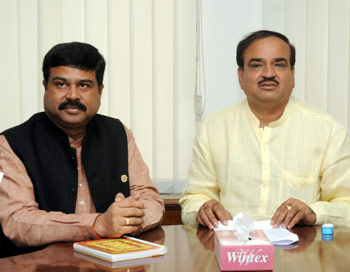 Odisha Channel Bureau New Delhi, Sep 27: Shut down since 2002, the Talcher Fertilizer Unit will be revived with production from 2018, said Union Chemical and Fertilizer Minister Anantha Kumar and Petroleum and Natural Gas Minister Dharmendra Pradhan after joint review of the project in New Delhi on Friday.After joint review the Ministers said the state-owned Coal India Ltd, gas utility GAIL India and fertilizers majors RCF and FCIL will form two joint ventures for revival of Talcher urea plant in Odisha at a cost of Rs.9,000 crore.The first joint venture will be for setting up of an upstream coal gasification unit and the second joint venture part involves setting up of a urea-cum-ammonia nitrate complex.”The plant will have a capacity of 1.3 million tonnes per annum of urea and 3.3 lakh liters of ammonia nitrate.This will be the first plant in the country using coal gasification technology,” Union Fertilizer Minister Anantha Kumar said. Meanwhile, the old equipment, plant and machinery cannot be used in the new unit and is worth only scrap.This scrap is being sold to make way for setting up of a new plant.Petroleum Minister Dharmendra Pradhan said since three Ministries like Coal, Fertilizer and Petroleum are involved in the project; it has been reviewed every month to monitor progress and to ensure strict adherence to time line as planned..Pradhan said by November this year new companies would be formed and immediately after that Detailed Project Report (DPR) would be ready and financial closer would be done to go ahead with implementation with speed.Union Fertilizer Secretary Jugal Mohapatra was also present during the review meeting.