Devotion brings sublimation.And souls inhabit the evolved lives or they have the ability to reform one.When en route to Puri we visited a small village called Baligaon. Nestling amidst lush greenery, with coconuts, rice fields and banyan trees and several ponds of clear water very often blessed with lotus flowers, the thatched huts and dusty roads led us to the holy land of Dasia Bauri. 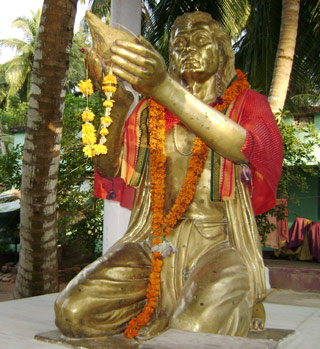 Dasia Bauri was a great devotee of Lord Jagannath in the 15th century AD.He was born into a low caste of weavers’ family and lived with his wife Malati in a hut on a small piece of land. For a living he did his traditional weaving.They lived in abject poverty and managing two meals a day was not possible on several occasions.

Those days there was the tradition of having a prayer hall in the village where the Bhagabata texts were read aloud and explained in discourses. The villagers assembled for the occasion. But this prayer hall was kept away the untouchable castes, and Dasia Bauri too was a victim of this. While he was not allowed inside, he was the most avid listener from a distance. Those days Pancha Sakhas or five friends who were devotees of Lord Jagannath were very famous. Of them Dasia adopted Saint Jagannath Dash as his guru or spiritual master. Once, some of the villagers were going to the Puri temple, Dasia had no means to accompany them so he offered them a coconut to offer to Lord Jagannath on his behalf.

He insisted that they had to offer it at the Aruna Stamba (the monolithic iron pillar that stands at the entrance but outside the Puri temple) itself and till the God himself receives it, they should not leave the gift. The friends found it amusing that the god Himself would accept a coconut at the gate of the temple and yet they gave it a try. And lo and behold! It happened exactly the way Dasia wanted! They were mesmerised by the miracle. When they came home Dasia became a revered cult figure for them.

Once Dasia had gone to witness the Chariot Festival as that is the only time for untouchables to see the idols.When he saw his beloved he was so overwhelmed that he could no longer control himself. He acted in absolute ecstasy, singing his glory, and rolling in the dust! He gave a tough time to his companions to bring him back to his home. After the incident, nothing was the same. He saw God manifested everywhere. Once his wife served a plate of rice and put green lentils in two spots. When Dasia sat to eat he could not take his eyes off in utter joy. For him those two deep jade spots appeared like the round eyes of Lord Jagannath himself. He danced in frenzy and till the curry was removed he would not be calmed. Soon the news of his devotion spread and residents even from neighbouring villages came to see the devotee. Many incidents took place.

Once his wife Malati who could not walk the distance to Puri wanted her husband to narrate how the gods looked like when adorned on their wooden chariots. Dasia took her to the Gothagadia pond behind their hut and asked her to peer into the deep waters. There was a dazzling reflection of the triad sitting on their chariots. The pond is still there hedged with banana and amla trees. No one bathes, washes utensils or clothes in it. It is never defiled. No one catches fish too.

Once one villager tried to do so and when he tried to cook it, the cauldron was filled with blood.No one attempted to touch the holy water since then. It is believed there are poisonous black cobras too in the depth of the waters.

Once the Pancha Sakhas came to visit Dasia and heard that he could show his wife the images of Lord Jagannath in the water. They also wanted to have a glimpse of the deities. Dasia complied and there was the complete image of the god with four arms. Once this devout family had nothing to eat in the night. Lord Jagannath appeared at the gate in disguise asking for food. Malati could not find anything to feed the hungry man and managed to spot only a speck of left over food. That she offered to the guest who said he was feeling satiated and left. That night, the king of Puri, who is the first servitor of Lord Jagannath, had a dream that Dasia Bauri had nothing to eat. The king arranged for food to be sent every day to his home. In fact just after the bhog is offered to the triad in the Puri temple, the first offering is sent to Dasia Bauri.

The tradition was kept alive for a long long time.Every year Dasia Bauri would send a basket full of ripe mangoes for Lord Jagannath and the priest would discover the kernels at the altar as the gods indeed ate the fruit.For over five Centuries the tale of Dasia Bauri thrives in the area. The place has not changed much. But the place was lying in neglect till recently. With the initiative of some people, two committees have been formed. One is Bhakta Dasia Bauri Smruti Pitha and the other is Tulsi Khsetra. Five members from each of the 25 villages around are members of these committees.They have taken the initiative to set up a bronze statue of Dasia Bauri.

Flowing hair, well built and with a coconut in his hands and offering it to Lord Jagannath, the sight fills one with spiritual thoughts. This statue was made by eminent artist Bipra Charan Mohanty in 2005. There is a 45-foot high temple for Jagannath being constructed facing east and in front of Dasia Bauri’s statue. Bijaya Kumar Parida is the artist in charge of shaping the lovely shrine.

There is a library stocked with rare holy texts.Dasia Bauri’s tomb is also another holy structure here.It rises like a high conical shape with two eyes drawn on the body. Here lie the remains of the Holy Spirit. There is a monastery built by the Gaudiya monk maharaja Dasarathi Das in the 16th century itself. Here images of Radha Krishna, Chaitanya, Haladhara Das, Krushna Das, and other images are worshipped. Here also there is a wheel that is worshipped.

It is believed to have been gifted to Dasia Bauri by Lord Jagannath himself. The priest, who is here since 1990, says once some scholars from Bhubaneswar wanted to study the palm leaf manuscripts that are being worshiped at the monastery. But when he took them with him, the writing had vanished! He returned them to the monastery in despair. The priest was sad. After some days however they started reappearing and reaffirming the significance of the site.

Ghanashyam Swain, 40, is a lecturer in Philosophy in Delang College nearby. He is instrumental in the temple construction.He says there are several projects like having a museum too and to make it a destination for tourists also.

The place is too important to be ignored. Proper road, money to fund several projects, involvement of more people is the need of the day. Ganesh Panda, an engineer with Walmi, is passionately involved with the holy place.When he visited it last year, most of the two acres of land was lying in neglect. He helped clear the water body here, put mud and put up a boundary around the land and planted a basil garden. The basil’s tender shoots are a favourite with Lord Jagannath.

In the pond he planted pink and white lotus flowers. Today it is a feast for the eyes. Every day lotus and basil is being provided to the Puri temple. Many useful pants have also been planted here. A jackfruit orchard is in his agenda as well as the round; shiny leaves are required to prepare the nose pin for Lord Jagannath several times a day!

The holy place fills one’s heart with bliss.In the month of Kartika, Shukla Ekadasi is observed as the most significant day here. Earlier the festival lasted one whole month.But lack of funds restricts the celebration to one day only. The Bhakta Dasia Smruti committee and Bhakta Dasia Smruti Pathagar are looking after the administration of the area.

Sri Jagannath Ashrita Mandali formed in 2003 by engineer Ganesh Panda has developed the ambience. The priest cooked a simple but fragrant meal of rice, dalma, sweet and sour delicacy and kheer for us. We sat on the clean mud plaster floor, in the open and were served on tender green plantain leaves. We savoured the food.

The malati creeper and lotus flowers, the basil garden all filled our minds that nothing can be compared with. Baligaon is situated on the road to Puri, about 15 km from Pipili Township. From the main road it is another three km on a serpentine mud road flanked by green paddy fields and lotus ponds.Ratnachira, a branch of the Bhargavi River meanders in fragments today.