A physiotherapist leads his family to feed hungry people during lockdown

Prafulla Das
On a hot summer afternoon in the first week of May this year, a Bhubaneswar-based physiotherapist was returning home from his clinic in Airport area of the city to his home near Kalpana square. As he stopped his vehicle to receive a phone call, he noticed about seven destitute people approach his car with empty plates in hand. They were in distress and in need of food. He quickly handed out biscuits that he was carrying and left for home. However, he was shaken by the sight and carried the thought with him. 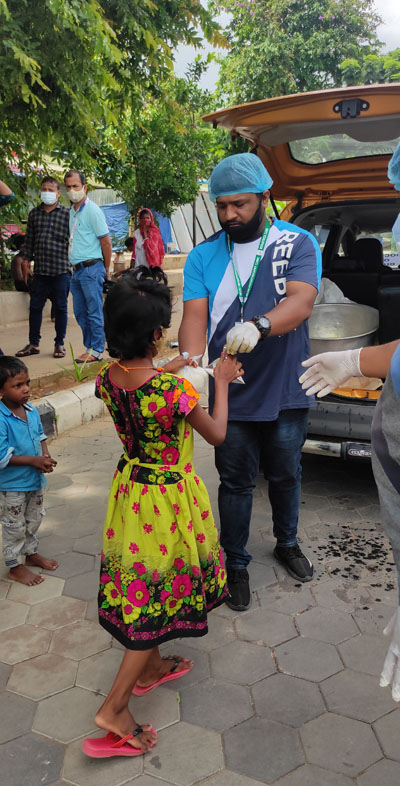 It was just two days into the State imposed lockdown to battle the spread of COVID 19, the second wave of which had gripped the entire nation. Odisha too was registering growing number of cases and witnessing fresh peaks. The capital city was most severely hit in the second wave.

Moved by his encounter, physiotherapist Biswajeet Sahoo (35) narrated his experience before his wife and parents during lunch that very day. He shared with them how people were suffering, looking for food, and expressed his desire to feed those hungry on the streets.

Sahoo’s family was convinced that there was no better time to do good and help those in need. The next morning, they prepared breakfast of Suji Upma and vegetable curry for about 50 persons and distributed it among the beggars and destitute on roadsides between Raj Mahal square and Master Canteen area of the city.

While moving through the streets, Sahoo came across many more poor people who had little to eat since they were suddenly left without work due to the lockdown. With better realisation of the ground reality, he returned home as soon as the breakfast stock was finished.

Sahoo figured that lunch as a principal meal would be more helpful to the beggars and homeless. From the second day onwards, the family decided to prepare meals consisting of rice, dal and vegetable fry for about 100 persons and distributed the same during lunch hours.

On the third day, the number of meals was increased to 150 to cover an even larger stretch of area. “Our efforts met with great success. We found many of the people whom we had given breakfast the previous day. And all who got lunch to eat had smiles on their faces,” recalls Sahoo.

Sahoo owns and runs two private physiotherapy clinics, including one in the ground floor of his house. It was therefore not difficult for Sahoo to drive freely in the city during lockdown and weekend shutdowns. He even roped in his assistants at the clinics to come and assist in cooking and accompany him for distributing food. On some days one of his close relatives joined him in the exercise.

Sahoo’s team was once asked by the policemen on patrolling duty about whether they had taken permission from the Municipal authorities to distribute food during lockdown. “Is it necessary to take permission from anyone to feed hungry people”, was his counter question to the men in Khaki, who were then convinced and left them to continue with their mission. Sahoo never went to seek consent from the authorities. All the while his team members adhered to COVID protocols and ensured that people stood in queue maintaining safe distance from each other while food was being distributed.

Sahoo posted photographs of their experiences preparing and distributing food among the needy, on social media platforms. This was widely noticed across his circle in the city and outside the State. Relatives and cousins not only appreciated his work but also offered financial support to his initiative, and soon the number of his family members involved in the initiative increased to seven.

At home, Sahoo had to take adequate precautions to avoid COVID-19 infections. His mother is a chronic diabetic patient and father suffers from high blood pressure. He kept his ailing parents in isolation to see that he does not end up adding to their problems.

As the economic impact of the lockdown slowly intensified, Sahoo noticed that the streets he and his family members covered had more people turning up since many were left with no means to earn their livelihood because of the lockdown. They slowly increased the number of meals as they covered other locations where needy people were living in distress. The number of meals per day during lunch hours went up to 250 during weekend shutdowns when the city wore a completely deserted look.

Upon receiving information from the destitute people whom he continued to provide lunch, Sahoo went to distribute cooked food in VSS Nagar of the city where many leprosy patients live in a colony. The Sani temple nearby is where these people came to beg throughout the year for livelihood and that was closed due to the lockdown. Many of the leprosy affected people were found idling in their thatched huts in the settlement with little resource to manage. Of those living in the colony, Sahoo found about 20 persons with severe disability who asked for clothes and he provided the same to them.

They also provided hand sanitiser and masks to the destitute people and gave dry ration to several blind people and beggars living in different slums. A few needy auto rickshaw drivers were also provided dry ration for a month in packets. A cancer patient in a slum was given medicines and ration for one month by them.

On several occasions, Sahoo received information from netizens about poor people in distress through messages on social media platforms such as Facebook and Twitter asking them to reach out with food. They even served lunch to a group of nomadic families on the outskirts of Bhubaneswar upon receiving information about their distress situation.

After distributing food for two months until demand receded following a rescue initiative of homeless beggars by the city Municipal Corporation in early July, the team decreased the number of meals. Sahoo then distributed safety kits among delivery boys who continued to be in the frontline throughout the lockdown.

Until third week of July Sahoo was providing meals to 25 to 50 needy people per day as normalcy started returning with graded unlocking of the lockdown. He was also assisting some COVID-19 survivors to cope with post-recovery complications.

After the financial assistance from his brothers and sisters totalling to Rs. 1.20 lakh was spent during the first two months, Sahoo started spending from his own earnings despite the fact that his income had slowed down with fewer patients turning up at his physiotherapy clinics in view of the spread of COVID-19. He has not taken any financial help from anyone outside his relatives.

He is able to spend a portion of his income for the needy since he does not pay house rent being a native. He has decided to continue to feed hungry people until the lockdown is completely lifted and life becomes normal.

In case the pandemic’s third wave hits Odisha, Sahoo is planning to formalise the initiative and invite friends and other people to join him to serve the hungry and homeless people at the time of distress. In fact, he has already spoken to many friends in his profession to stay prepared with funds to meet any eventuality.

Sahoo had never seriously thought of serving the poor and destitute until he saw that group of people at Raj Mahal Square which moved him to take a plunge into volunteerism. As the physiotherapist in him runs the clinics to make a living, the social worker in Sahoo is committed to continue serving those in distress.