Hemananda Biswal passes away, to be cremated at his native place

Odisha Channel Bureau
Bhubaneswar: Former Odisha Chief Minister and veteran Congress leader Hemananda Biswal passed away at a private hospital in the capital city on Friday. He was 82. 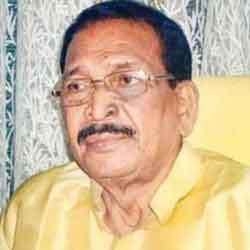 The mortal remains of Odisha’s first tribal Chief Minister Biswal will be cremated at his native place in Jharsuguda district today (Saturday) with state honours.

The mortal remains of the departed leader were brought from the hospital to his Bhubaneswar residence in Nayapalli area of the city on Saturday morning before being taken to his native village as per government protocols for cremation in Jharsuguda.

Chief Minister Naveen Patnaik expressed deep grief over the demise of Biswal. Biswal will always be remembered for his work towards the progress of the state and for the betterment of the people, Patnaik said.