PUCL demands review of cases against people of Dhinkia

Odisha Channel Bureau
Bhubaneswar: People’s Union for Civil Liberties (PUCL) has expressed serious concern over the mala fide action of the police in implicating local villagers and human rights defenders with fabricated cases following the incident that happened on January 19 in Dhinkia. 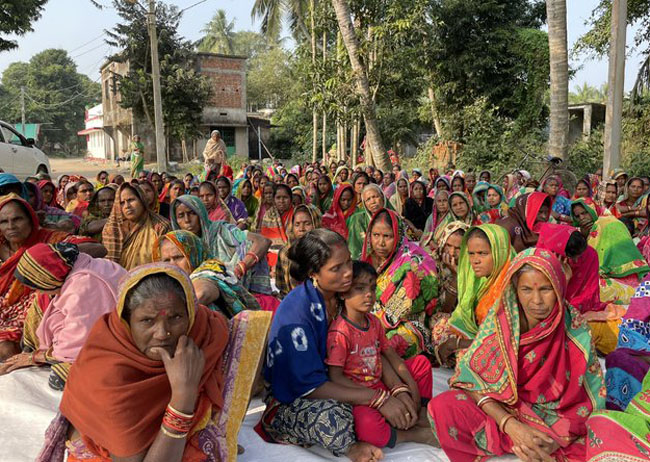 In a statement, Odisha unit of PUCL pointed out that in response to a number of PILs about the police repressions in Dhinkia, the Orissa High Court has on February 16 appointed a Lawyers Committee – consisting of three lawyers representing the petitioners and two government lawyers – to visit the area for an “assessment of the situation on the ground” and report to the Court.

The order of the High Court specifically mentioned that if there are villagers who apprehend of returning to the village for fear of safety or of arrest, their names be furnished by learned counsel for the petitioners to Debakanta Mohanty and J. Katakia, Additional Government Advocates who can then arrange for them to be escorted back to the village without any fear, harassment by way of threat of arrest or risk to their safety, said Pramodini Pradhan, convenor of PUCL (Odisha) in the statement.

“The committee visited Dhinkia on 19th February. It is learnt that some of the petitioners’ lawyers had provided a list of villagers, who were in hiding and wanted to return and depose, to the government advocates. But, when the villagers came to meet the committee they were attacked by a section of people. Some people have been seriously injured in this attack. One person who was accompanying the lawyers was allegedly stopped by a section of villagers and manhandled.”

“This happened in the very presence of police and right in front of a member of the lawyers’ committee. As the Committee began its work, the villagers who came to give their testimonies were attacked. There are enough video recordings available which show the attacks on people happened in the presence of the police, including the Additional SP of Paradip, and of the committee,” Pradhan said in the statement.

“What is worrying is that while the High Court’s order to provide security to those who wanted to return and depose was trivialized and the villagers were subjected to physical attacks in the presence of police and the committee, as many as three cases have been registered at the Abhaychandpur police station on February 21 against those very people who were being attacked and injured. One of these cases has been filed by the IIC himself in which, among others, one human rights activist and the person who was accompanying the lawyer have also been implicated.

“It needs to be noted that on the very day of the incident i.e., 19th February, the SP of Jagatsinghpur while speaking to the media gave a misleading statement that the person accompanying one of the Lawyers Committee members brought with him several people from outside and that led to the attacks.

Pradhan said that PUCL has been observing the role of the police in Dhinkia-Chaaridesh since the time of the anti-POSCO struggle and has expressed serious concerns time and again.

“It has been a pattern to implicate people in false cases and to attack them brutally. In the course of last two months, on a number of occasions the police have resorted to these methods. We reiterate that people in Dhinkia have every right to oppose the proposed JSW project which is going to snatch away their livelihoods and cause serious ecological destruction to the area,” she added.

Stating that dissenting voices of people need to be addressed democratically and not by criminalising it, Pradhan demanded that the allegations of police intimidation and excesses be investigated by a court monitored investigation team.

She further demanded that all false criminal cases registered against the people opposing then POSCO and now JSW be reviewed and all concerns raised regarding the project be addressed in an atmosphere of peace where people can express their opinions freely.

“The police forces be withdrawn from the area; the present IIC of Abhaychandpur PS and SP, Jagatsinghpur be transferred as there are serious allegations against them of continuously intimidating people to support the JSW project, Pradhan demanded.