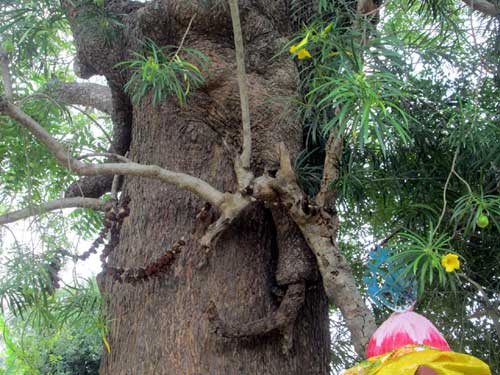 The river-locked Jagatsinghpur lapped up by Bay of Bengal has earned the rare privilege of becoming the home to holy logs of divine triad of Lords – Jagannath, Balabhadra and sister Subhadra. While Daru of Lord Balabhdara was earlier located at Sarala shrine near Kanakpur, Goddesses Subhadra’s logs were identified at Adhanga under Biridi block.Cutting across caste, creed consideration, everybody is overwhelmed in the district.“We were elated after Daru’s identification in Kanakpur and Adhanga.Our ecstasy has reached a climax with the holy neem at Kharipadia being accorded the Daru of the Lord of the Universe.We feel we the people of Jagatsinghpur are the blessed children of the almighty.The God would for sure save us from natural calamities in future,” said Prasant Kumar Routray, a native of Jagatsinghpur Township.Meanwhile, keeping in view the expected heavy rush, the administration today has stopped the devotees from visiting the Jagannath Daru site.In view of preparatory measures like repairing road to the log site, devotees have been requested not to visit Kharipadia, said Jagatsinghpur Collector Satya Kumar Mallik. “Lord has blessed us.God is with us.I had visited my relative’s house at Kharipadia.I never thought that lord is present amid us.It’s a matter of pride for us,” remarked a devotee Ranjan Mishra.