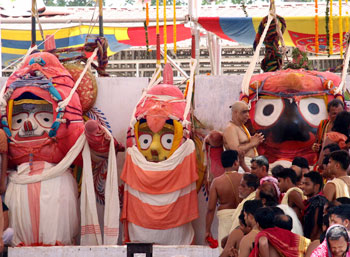 Odisha Channel Bureau PURI: Snana Yatra of Lord Jagannath, a major ritual related to the annual Rath Yatra, was celebrated in this holy coastal town of Odisha with traditional gaiety and religious fervour on Monday.Lakhs of devotees thronged the town to have a glance of the deities in Gajanana Besha at the Snana Bedi amid tight security arrangements.Snana Yatra is observed on the day of Devasnana Purnima, the full moon day, when Lord Jagannath, Lord Balabhadra, Goddess Subhadra and Sudarshan are brought out from the Jagannath Temple and taken in a procession to the Snana Bedi ceremonial bathing.As per the tradition, the Daita servitors escorted the three deities from the Ratnasimhasan of the sanctum sanctorum of the temple to the Snana Bedi in Goti Pahandi.The deities were taken in the Goti Pahandi procession one after another with Balabhadra first and Lord Jagannath at the end amidst concert of drums, cymbals, bugles, ghantas and chanting of Hari Bol and Jai Jagannath, besides danseuses performing Odissi dance.After the Pahandi was completed, the deities were placed on the Snana Vedi (bathing altar), a huge raised platform overlooking the Grand Road facing the East and located at the outer complex of the Jagannath temple.The priests used 108 pitchers of water drawn from the Suna Kua (golden well) blended with aromatic herbs, Sandal wood paste, Keshar and Karpur for bathing of the deities.After the bathing ceremony, the deities were dressed in new attire.A special set of servitors decorated the deities with elephant attire (Gajanana Besha or Hati Besha), presenting them to the devotees as the incarnation of Lord Ganesha.Late at night, the deities would be taken into a solitary place in the temple called Anasar Ghar (room for the sick) where the deities would recline to bed for supposedly suffering from fever.During the sickness period the temple Vaidya (temple physician) would treat them with herbal medicines and put them on fruit diet served by the Daita servitors.There will be no public darshan of the deities until the Nabajouban Darshan, a day before the annual Rath Yatra scheduled to be held on July 6.