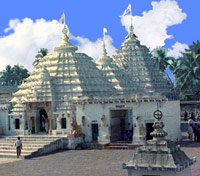 If Jagannath rules at Puri, Baladev Jiu rules at Kandrapada. The fame of Kendrapara is comparable with that of Puri by all counts.Known as the Tulasi Kshetra, it is treated as sacred as the Sri Kshetra Puri, Ekamra Kshetra Bhubaneswar, Biraja Kshetra Jajpur and Arka Kshetra Konark.

Also known as Gupta Kshetra, Brahma Kshetra, Kandar Nagar, Kendra Palli and Kandharapadhi at different periods of history, Kendrapara, as it is now known, has a rich cultural heritage. As the legends would have it, when the Mahabharata war began between the Kauravas and Pandavas, Balarama, the elder brother of Sri Krishna did not take any side and set out on a sojourn of the country.

In course of his visits, he came to the Kendrapara region where a demon named Kandarasura was torturing the people.Finding no way out, they appealed before him to save them from the demon’s oppression.Taking pity on them, Balarama killed the demon and threw his limbs at various places. The spot where his body fell at Kendrapara came to be known as Balagandi. Kandarasura had a beautiful daughter named Tulasi who asked Balaram about her future after the death of her father. The Lord was pleased with her humility and indicated that he will marry her and make the place as his abode to be known as Tulasi Kshetra during the Kaliyuga. Until then, she should wait as a Tulasi plant.

It is said that the image of Balaram was discovered from amidst a garden of Tulasi plants in Balrampur near Kendrapara. There are many such absorbing stories associated with history and culture of Kendrapara. The present temple of Baladeva Jiu, built during the Maratha Rule in Odisha in the 17th Century at Ichhapur in Kendrapara by the feudal rulers of Kujanga and Chhedara namely Gupali Pandha and Srinivas Narendra is the most remarkable monument in the town.

The Vimana and the Jagamohan have been built in Pidha style with a spacious courtyard and surrounded by high walls. Within the premises are found the shrine of Kanaka Durga, Snana Mandap, Jhulan Mandap, Garuda Pillar, images of Tulasi Devi and Sri Gauranga besides the Kitchen, stores etc. Around the temple are the Parswa Devatas (side deities) like Ganesha, Nrusimha, Varaha and Kamadeva.

The ceiling and the inner walls of the Jagamohana are painted with mythological scenes and Dasavatara.Like Sri Jagannath Temple of Puri, the presiding deities of the shrine at Kendrapara are Balabhadra, Subhadra, Jagannath and Sudarshana. But the images are strikingly different from those of Puri and for that matter any other Jagannath temple in size, shape and structure.

As if to establish that he is the lord of this shrine, the image of Sri Balabhadra is conspicuously taller and bigger than the normal size. Sri Jagannath is universally renowned as the Chakadola or the round eyed but here his eyes are rather more oval than round. The rituals and festivities of the temple are observed on the lines of the ones followed in Puri.

The most important festival of Kendrapara is the Rath Yatra held in June-July like that of Puri but here the deities are taken out of the temple in one chariot (in stead of 3 chariots as in Puri). The chariots are colorfully decorated and pulled by the devotees to Sri Gundicha temple to be returned after nine days with all rituals.

The other important festival here is Sri Panchami when the deities are decorated with Kanchi Kaveri attire (Vesha). This is the only place where such a costume is worn by them to remind the people of the role they played in helping the king of Odisha to win over Kanchi according the chronicles of the Sri Jagannath temple.

Kartika Purnima is yet another festive occasion when the whole temple is decorated and the devotees keep awake the whole night. Lakshmi Puja held in October after Dusahara enlivens the town with gorgeous decorations of the pandals. Like the deities of Jagannath Temple, Puri, the deities of Baladev Jiu Temple had also to take refuge at different places to be saved from the ugly touches of the Yavanas. Sakhi Bata, the banyan tree is the mute witness of such incidents.

Rasavali, a locally prepared sweet meat made of cheese and milk is the specialty of Kendrapara which is offered to the Lord and made available to the visitors. The shrine of Binod Bihari and Govind Jiu are two other important monuments of Kendrapara because of architectural designs, delicate carvings and religious sanctity.

According to an inscription placed in the temple precincts, the shrine of Binod Bihari was established by Sri Ram Govind Jagaddev in 1276 Sal or 1868 AD under the supervision of Sri Gopaldas Babajee. The presiding deity of the temple is Sri Krishna and his consort Sri Radha. The images are made of black chlorite stone.Festivals like Nanda Utsav, Giri Govardhan Puja etc.associated with the life and activities of Sri Krishna are observed here with pomp and ceremony.

Govind Jiu is another abode of Radha Krishna in Kendrapara which is worth visiting.Festivals like Chandan, Jhulan and Holi are colourfully observed here. Kotha Melana, the congregation of mobile deities of the region during Chandan Yatra is comparable with any such event elsewhere.

Kendrapara is also known for the time tested Sun clock, a specimen of technical and engineering marvel.Placed in the heart of the city, this clock gives time to the amazing precision.One can correct one’s watch with this clock anytime of the day subject to only one condition that the sun should be shining at that time.

There are a few places of interest around Kendrapara, some of which are described below.About 35 km from Kendrapara is Ali. Picturesquely located on the bank of the river Kharasrota, the scenic beauty of this place, especially during sunrise and sunset, is unforgettable. Boating in the river is an experience by itself.One can negotiate with Bhitarkanika sanctuary through this river.

The Laxmi Varaha Jiu Temple of Ali built about five hundred years ago is a fine specimen of temple architecture of Odisha. The outer walls are smeared with beautiful sculptures. An image of Varaha, the 3rd incarnation of Lord Vishnu is worshipped in side the sanctum sanctorum. There are not many temples where Vishnu is worshipped as Varaha. The icon is a monolith of black chlorite. Around the Vimana is the shrine of Sri Chaitanya who is said to have visited the shrine.

Fifteen km before Kendrapara on the way from Cuttack, a branch road of about 5 km from Katikata leads to a small village – Asureswar, where stands the shrine of Lord Raghunath Jiu. On the pedestal inside the temple, the deities of Sri Ram, Sita and Lakhman flanked by Nrusimha and Sri Jagannath on both sides and Radha Krishna in the front are worshipped with devotion. At the entrance, is worshipped the image of Hanuman.

It is said that the head of the demon Kandarasura killed by Lord Balaram fell at this place and hence the name Asureswar- a derivation of Asura Sura meaning head of the demon. Ram Navami is the main festival of the place, the special feature of which is wearing of monkey masks by the local people to mark the occasion.

On the other side of the village is the temple of Dadhivaman with Jagannath Balabhadra and Subhadra as the presiding deities inside. The monument is representative temple architecture of Odisha. Five km from Katikata across the river Luna is the shrine of Harachandi at Chhapchikana.The presiding deity is a ten armed Durga made of Chlorite stone.

A weeklong festival is held here on the occasion of Raja parva during the summer months. If you feel suffocated in the materialistic world at times and look for seeking solace in a spiritual atmosphere, if you want to forget for a moment the worries and tension of material wealth and inhale the fragrance of divine smell, a visit to Kendrapara with Ali, Asureswar and Chhapachikan will be a rewarding experience.

Situated on the bank of the river Govari, about 60 km from Cuttack and 90 km from Bhubaneswar, Kendrapara is approachable by an excellent road with beautiful country sides all along. Bhubaneswar or Cuttack or Kendrapara can be made the base to visit the places in relaxed comforts.Excellent accommodation and transport facilities are available at these places to make the trip memorable.

If you have time, there are many more places to visit around Kendrapara – like the Bhitarkanika Wild Life Sanctuary, Ratnagiri-Udayagiri-Lalitgiri Buddhist Complex, Jambu Island , Hukitola islands, Light House, Paradip Port etc. The lure is irresistible.