Kaushik, a graduate in mechanical engineering from NIT Kurukshetra, joined NTPC in 1987 as an executive trainee. 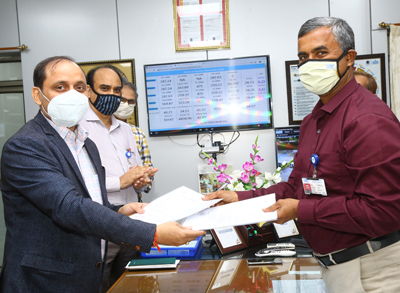 Odisha Channel Bureau
Visakhapatnam: Diwakar Kaushik has taken over from V. Sudarshan Babu as Head of the Station at NTPC Simhadri, Parwada in Viskapatnam.

Kaushik, a graduate in mechanical engineering from NIT Kurukshetra, joined NTPC in 1987 as an executive trainee.

After training, his first posting was at Aurya in 1988 in Operation Department.
Earlier, he worked at different stations of NTPC at Aurya, Faridabad, Dadri, Mauda & CC-EOC and held several important positions in a career spanning around three decades.

He has rich experience in power plant management particularly in Operation Department.

He has also undergone foreign training in ERP Operation in 2006 at Swindon, UK & leadership development in 2018.

As head of the power station, Kaushik will coordinate all activities of NTPC-Simhadri Plant

Meanwhile, Sudarshan Babu was felicitated by team Simhadri following his transfer to Kahalgaon as ED.