Holi celebrated with fervor in Odisha 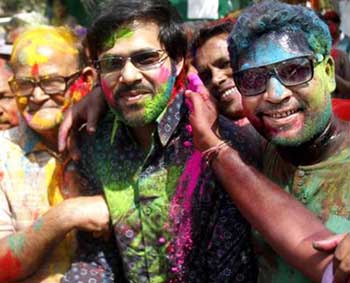 Odisha Channel Bureau Bhubaneswar, Mar 6: Holi was celebrated with traditional fervour across Odisha on Friday.The festival was celebrated at every home and temples with lots of colour and fun.The festival brought together people belonging to different creeds and religions to celebrate the festival of colours and greet each other on the streets and various institutions.A large number of people thronged the Jagannath temple in Puri to worship the deities on the occasion of Holi.Holi celebrations were also organised at the offices of different parties such as Congress and BJP in the Capital city of Bhubaneswar.Chief Minister Naveen Patnaik, however, did not play Holi and many of his supporters had to return without entering Naveen Nivas.Odisha Pradesh Congress Committee president Prasad Harichandan and many leaders of the Congress first celebrated Holi with the students of the Bhima Bhoi School for the Blind before they went to celebrate the festival with their party workers a Congress Bhavan.Harichandan also attended the Holi celebrations outside Jayadev Bhavan where people from different walks of life hugged each other and danced to the tunes of evergreen Holi songs.Odia film actor Sabyasachi Mishra too attended the Holi celebrations outside Jayadev Bhavan.Many transgender people participated.As many as 30 platoons of policemen were deployed at different locations in Bhubaneswar to prevent any untoward incident during the Holi celebrations.A tragic road accident, however, was reported from Bargarh district in the western part of the State in which four people, including three of a family were killed.The mishap took place when the victims were on their way from Rengali to a temple in Bhatli village on the occasion of Holi.Besides, about 10 persons, mostly Holi revellers, were reported dead by drowning and different road accidents.While three deaths by drowning were reported from Jajpur districts, the road accidents were reported from several places including Balangir, Ganjam, Puri and Bhubaneswar.