On the corner of the busy market street in front of the Lingaraj temple, 75 years old Debaraj Barik runs his small hair-cutting saloon, he has been doing it since 1959. He had begun the trade at a young age of fourteen, working as an apprentice barber. Recollecting his childhood days, he says that when his father passed away, he had to make a difficult choice between pursuing studies and taking up a job. “I chose the latter and joined my uncle’s salon, where I learnt the techniques and set up my own salon at the age of 19. He has remained there since, for a full 61 years. In fact, his is the oldest saloon of Bhubaneswar. 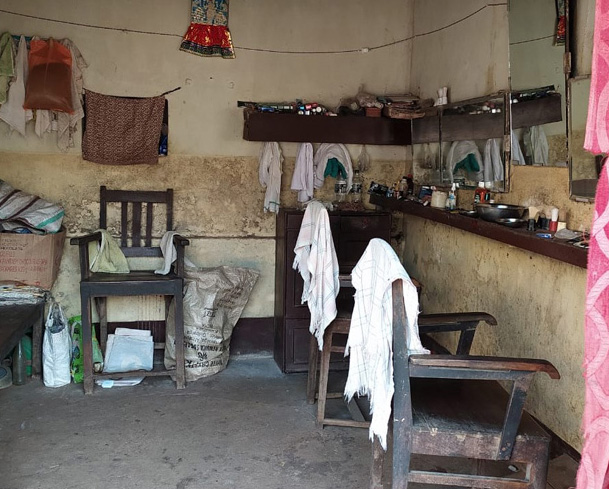 “I have customers from three generations,” the barber said. “Still cutting their hair.” He is proud of his loyal clientele. His saloon has seen writers, poets, politicians and local celebrities over the decades. Nearly all the customers have been coming here for generations. It used to cost only 2-4 annas for a haircut and 2 annas for a shave. The lockdown has not downed his energy or his passion in the field for over 60-long years now. He disinfects his shop with turmeric water and neem and said that post lockdown; he gets the usual crowd to get hair cut or shaving done.

Prafulla Swain of Harichandi Sahi recollects the days when he would come with his grandfather to Deba Barik’s saloon at the Badhiebanka Chhak. In fact it was the only saloon, most of the barbers of Barik Sahi would go about their profession with a small wooden box in which they carried the tools of their trade which included combs, brushes and scissors, straight bladed with large circular finger holes, folding cutthroat razor, which used to give the smoothest shave of all, powder puff and bowls and a mirror and offered their services home to home. Some of them set up shop under convenient shady trees near the different bathing ghats of the old town.

Old fashioned barber shops have become nearly extinct, now hair salons are prominently displayed around every corner. However, Debaraj Barik has been keeping the tradition of the old-world haircutting alive. His saloon is a no-frills male haven. Mirrors along two facing walls set at a slight angle to the vertical so that one can see the back of his head. It also gives the illusion of space.

Deba Barik recollects that he faced competition when disposable safety razors became popular, allowing men to shave in their own homes. As more and more brands hit the market with cheap razors, several customers stopped outsourcing their grooming. But for haircuts, they still had to rely on the barbers.

His saloon has a conversational and comfortable air. The high antique wooden chairs are something to behold. These chairs are too large for small boys, so a board is placed across the arms for them to sit on. Earlier all shaving was done with straight razors. They were honed regularly on whetstones and stropped on a leather strip before each shave to maintain the edge. The ubiquitous tin of talcum powder, puffs and the alum astringent can still be seen. In earlier days, before the use of blades, it was common to nick a person, and when this happened, the barber rubbed a rounded block of alum on the cut to stop the bleeding. Nothing was sterilized. The barbers used the same combs, scissors, clippers, razors and mugs for everyone. Nobody seemed to mind, no one ended up any worse.

He said that his children insist he quit and take rest, but he refuses. “I cannot give up on what I love to do. I have no plans of retiring. I will continue this profession till my last breath,” he said ardently. The saloon’s days are numbered. Very soon the small place will be bulldozed like the many other iconic shops which dotted the Lingaraj temple periphery. The shop is slated for demolition in the modernisation drive being executed under the Ekamra Khestra Plan.

If you do want to sit back and get the full experience of a vintage saloon, a shave with a cut throat razor and a neat haircut which will cost you just Rs. 50, Deba Barik’s saloon open from 9 am to 7 pm every day except Sunday. Go before it is too late.

There are some things that are better the way they were.