Rajkumar MohantyPuri, June 28: Leader of Opposition in Odisha Assembly Narasingha Mishra today reiterated the demands of Congress for a judicial probe into Brahma Parivartan fiasco by a sitting high court judge to find out the guilty and resignation of Chief Minister Naveen Patnaik. 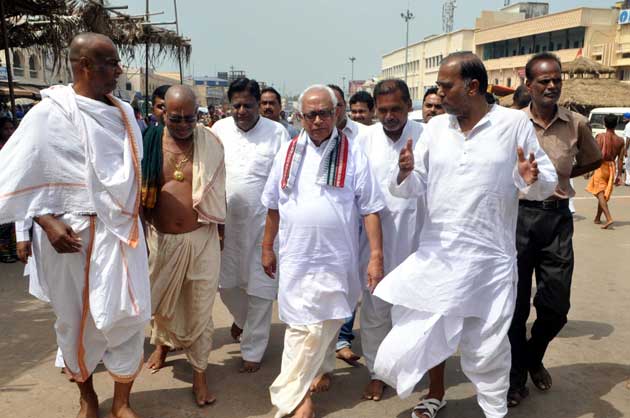 Mishra, along with other Congress leaders, discussed the issue with the District Collector Aravind Agrawal and Superintendent of Police Asish Kumar Singh and studied the servitors’ Record of Rights book to ascertain the exact duties of the Daita servitors during the Brahma Parivartan ritual.They too met Binayak Dasmahapatra, the Biswabasu Daitapati in this regard.Addressing the media persons, Mishra said allegation of theft of Brahma is a very serious issue.The ongoing revelations have hurt the religious sentiments of millions of Jagannath lovers and devotees, he added.“The government miserably failed to carry out this important ritual of the deities,” he said.The veteran Congress leader attributed the failure to Chief Minister Naveen Patnaik who he alleged never took this issue seriously.“Naveen Patnaik has let down the devotees down.Suspension of two Daitapatis is an eye wash.Patnaik should resign and adequate steps should be taken for smooth conduct of Rath Yatra of the deities,” Mishra added.He was accompanied by Congress leaders Kishore Patel, Jagannath Patnaik, Ananta Sethi, Prakash Behera and Anuman Mohanty.