As hundreds of activists of both the parties were taken into custody while forcibly enforcing the bandh, thousands of people were stranded at bus stops, railway stations and pilgrimage centres across the State.

According to reports, public transport remained paralysed as protestors blocked squatted on railway tracks and highways causing severe inconvenience to people who were stranded. 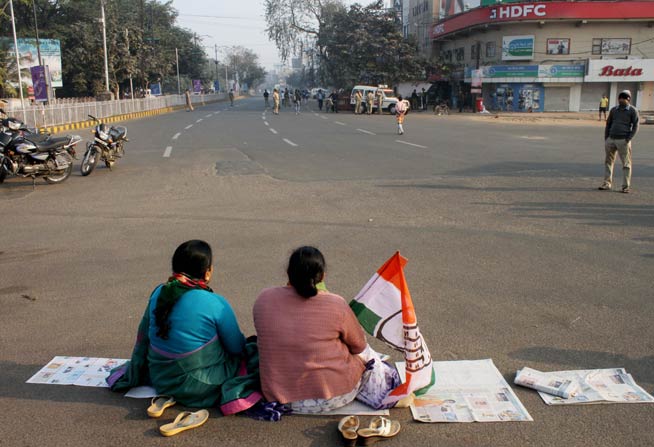 Commercial establishments and banks downed their shutters, while educational institutions remained closed though attendance in government offices was near normal.

Chief Minister Naveen Patnaik and many Ministers and senior bureaucrats were escorted to the State Secretariat under tight security cover even as the opposition activists staged protests in the capital city.

The bandh passed off peacefully even as opposition leaders and workers courted arrest at many locations in the State. The police had made elaborate arrangements to prevent any untoward incident.

The supporters of Congress and BJP, however, clashed at Pipili, about 15 km away from Bhubaneswar, leaving one injured.

A similar clash also took place in Khandagiri area of the capital city, but no was injured in the scuffle between the two-sides.

Even though the State government had ordered a judicial probe by a sitting District Judge into the alleged gang-rape of the 14-year-old girl by four men in uniform, opposition parties are now demanding a CBI probe into the case.

The victim girl, who had alleged that she had been allegedly raped by four men in uniform on October 10 last year when she was returning from the Kunduli daily market to her home in nearby Musaguda village, the Human Rights Protection Cell (HRPC) of Odisha police had submitted a report to the State Human Rights Commission in November stating that there was no medical evidence of rape though the girl was examined by three teams of medical experts.

The State government, which had previously ordered a Crime Branch probe into the case, had ordered a judicial probe to conducted by a sitting District Judge after the HRPC Cell said that that there was no medical evidence of rape in the case.