BJD remains strong in coastal Odisha with victory in bypolls

Prafulla Das
Odisha’s ruling Biju Janata Dal headed by Chief Minister Naveen Patnaik has won the bypoll in the Pipili Assembly constituency proving yet again that the regional party continues to remain strong in the coastal belt while continuing to remain in power in the State since March, 2000.

The victory in Pipili is significant for the BJD since the gram panchayat and urban local body elections in the State are scheduled to be held early next year. The BJD has already started organising party meetings and reaching out to the people ahead of these elections.

The Chief Minister has also been touring different districts in the recent weeks adhering to the COVID-19 protocols to distribute the newly launched smart health card under the Biju Swasthya Kalyan Yojana and inaugurating new projects. A victory in the rural and urban polls will also have a strong bearing on the 2024 general elections.

Soon after BJD candidate Rudra Pratap Maharathy defeated BJP’s Ashrit Patnaik by 20,916 votes in Pipili on October 3, the Chief Minister thanked the people of Pipili for their huge support to Maharathy. He also congratulated all workers and leaders of the BJD for the party’s victory, and reiterated that their party remains committed to serve the people. 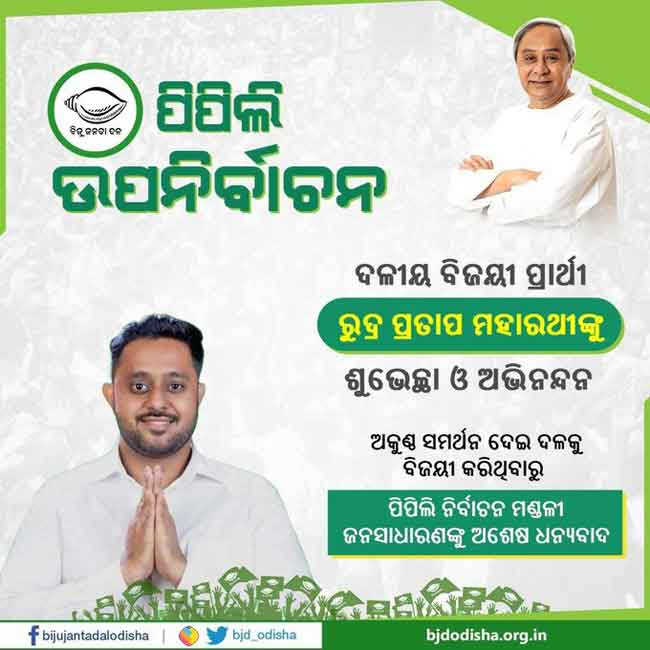 Although the Chief Minister’s charisma remains the key factor in the party’s success in all elections, he did not go to campaign for the party candidate in Pipili. He, however, had campaigned on virtual mode in April before the bypoll was rescheduled.

On the other hand, the BJP suffered defeat despite assigning many senior party leaders to address rallies across the constituency. The leaders who campaigned in Pipili include Union Education Minister Dharmendra Pradhan, former Union Minister Pratap Chandra Sarangi, and party’s national spokesperson Sambit Patra. Pipili, known for appliqué handicrafts, comes under the Puri Lok Sabha seat from where Patra had contested the 2019 elections and was defeated by BJD’s Pinaki Misra.

Earlier, the regional party had defeated the BJP in all the three elections that were held after the 2019 polls – first in Patkura Assembly seat where election was held in July 2019, after it was countermanded due to the death of the BJD candidate ahead of the general elections, and then in the two byelections that were held in Balasore and Tirtol Assembly seats in November 2020. The saffron party had lost the Balasore seat to BJD despite fielding the son of its legislator whose death had necessitated the byelection.

What is significant is that the BJD’s winning margin in the Pipili bypoll was higher than the 2019 elections. The BJP candidate also got 3,325 more votes than he bagged in the last election. This was primarily because the highest-ever voter turnout, which crossed 78 per cent, was recorded this time as against 76.37 per cent in the last election. In this situation, the BJD candidate performed well and bagged 96,972 votes, 8,454 higher than his late father Pradeep Maharathy got in the 2019 election. The bypoll was necessitated following death of Pradeep Maharathy in October last year.

In fact, the BJP was able to attract more Congress supporters towards it in most parts of Odisha in the 2019 elections. But the BJD seems to have succeeded in doing so in Pipili. It had done the same in the byelections in Balasore and Tirtol too.

As the Congress performed poorly with its nominee first timer Bishwokeshan Harichandan Mohapatra securing only 4,261 votes, a large group of party workers staged a demonstration at the Congress Bhavan in Bhubaneswar demanding that Pradesh Congress Committee president Niranjan Patnaik should quit his post in view of the party’s miserable performance in Pipili.

The Pipili bypoll was first scheduled to be held on April 17 but was countermanded after Congress candidate Ajit Mangaraj died of COVID-19 on April 14. It was then rescheduled for May 13, but was deferred further due to a festival on that day and was slated for May 16. But it was postponed again in view of the COVID-19’s second wave and held on September 30.

In the changing political landscape of Odisha where the BJD has been facing its previous ally BJP as its main challenger since 2019 elections, opposition Congress, which remained in power in the State for several terms before the BJD came to power, has been losing its vote base in a gradual manner with no sign of improvement. As a result, both BJD and BJP are busy eating into Congress vote share. The BJP had emerged as the No. 2 party in Odisha by overtaking Congress in the 2017 panchayat elections.

As the Congress was losing its support base due to lack of organisational work at the grassroots level, a senior BJD leader said the victory in Pipili has proved that the Chief Minister’s charisma is still intact due to his pro-people policies and the party would fight the BJP more effectively in the future polls.

Political analysts, however, are of the view that despite BJP’s consecutive defeats, the BJD cannot take the saffron party lightly since Congress, the third major player in the State’s political triangle, was losing strength by the day.The BJD seems to be on the right track so far.

(The writer is a journalist based in Bhubaneswar)