Odisha Channel Bureau
Bhubaneswar: Opposition Congress and BJP have given separate calls for a day-long Odisha bandh on Wednesday over the suicide by the Kunduli gang-rape victim on Monday.

Both parties gave the bandh call one after the other to intensify their agitation against the alleged failure of the State government to provide justice to the gang-rape victim. 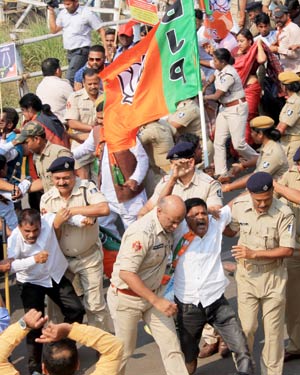 Essential services will be kept out of the purview of the bandh, both parties announced in Bhubaneswar.

The BJP, which had first given a call for a day-long bandh in undivided Koraput district, converted it to a statewide bandh hours after Congress gave the call for the dawn to dusk bandh.

Protest demonstrations were staged by both Congress and BJP in the Capital city before both parties called for a statewide bandh over the issue.

The 14-year-old girl committed suicide by hanging herself in her home in Maoist-infested Kunduli area of Koraput district on Monday afternoon.

She had alleged that she had been allegedly raped by four men in uniform on October 10 last year when she was returning from the Kunduli daily market to her home in nearby Musaguda village.

The Human Rights Protection Cell (HRPC) of Odisha police, however, had told the State Human Rights Commission in November that there was no medical evidence of rape though the girl was examined by three teams of medical experts.

The State government, which had ordered a Crime Branch probe into the case, had then ordered a judicial probe to conducted by a sitting District Judge.

Though the victim’s family had alleged that jawans were involved in the crime, both the CRPF and BSF had denied the involvement of any of their jawans in the crime.

Chief Minister Naveen Patnaik had on Monday condoled the victim’s death, while opposition leaders blamed his government for the delay in providing justice to her.