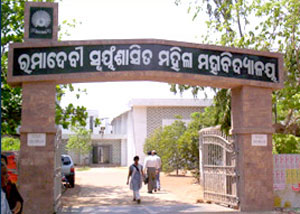 Odisha Channel Bureau Bhubaneswar, Jan 1: Rama Devi Women’s College, one of the premier autonomous for the women in Odisha, is all set to become the State’s first women’s university.Rashtriya Uchchatar Shiksha Abhiyan (RUSA), a Centrally Sponsored Scheme (CSS) under the Ministry of Human Resource Development for reforming the State Higher Education System, has accepted Odisha government’s proposal to accord university status to Rama Devi Women’s College.Briefing journalists here on Thursday, Odisha Higher Education Minister Pradeep Panigrahi said that the women’s colleges which are functioning under the administrative control of Utkal University will be brought under the new women’s university.The new women’s university will start functioning from the next academic session, Panigrahi informed.Rama Devi Women’s College started functioning as Government Women’s College from the year 1964 in a small building of the Labour Department of Government of Odisha.The college was shifted to the Old School Building of Unit-1 in 1966 and finally to the present campus of about 28 acres on January 1, 1969.The Minister further said that RUSA has also approved the proposal of the State Government to confer cluster university status to Khallikote Autonomous College in Brahmapur.The colleges which are located nearer to Khallikote Autonomous College will be brought under the cluster university’s purview, Panigrahi added.The Minister informed that the Central Government would release Rs.55 crore each for these two new universities in three years under RUSA for infrastructure development.The State Government has decided to introduce more courses in these two new universities, he added.