Odisha Channel Bureau
PURI: The annual Rath Yatra of Lord Jagannath started in this coastal Odisha town on Wednesday morning with lakhs of people witnessing the festival amid tight security.

About 10 lakh people have converged to have a glimpse of Lord Jagannath, Lord Balabhadra and Devi Subhadra on the Bada Danda (Grand Road). 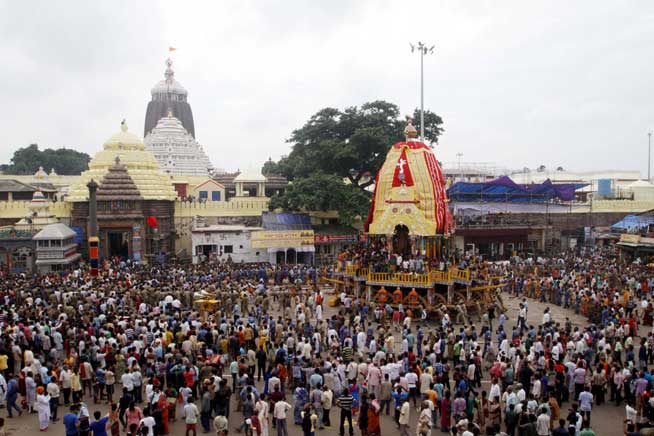 The rituals relating to the festival started early in the morning and then Sri Sudarshan, the divine weapon of Lord Jagannath, was first brought out to the chariot of Lord Jagannath in Pahandi procession.

The main deities were to be brought to their respective chariots in Pahandi procession one after the other through the Simhadwar, the main entrance of the Shree Jagannath temple.

The chariots will be pulled from outside the Shree Jagannath temple to the place in front of the Gundicha temple in the afternoon after completion of a series of rituals, including Chhera Pahanra, the customary cleaning of the chariots by Gajapati King Dibyasingha Deb with a golden broom.

Chief Minister Naveen Patnaik greeted the people of Odisha on the occasion of Rath Yatra.“Heartfelt greetings on this joyous & most auspicious occasion of #RathaJatra. Jai Jagannath!”, he tweeted.

The Rath Yatra is being telecast by a host of television channels including Doordarshan. The festival is also being webcast by different web portals, including http://jagannath.nic.in, the website of the Shree Jagannath Temple Administration.

Rath Yatra is also being celebrated in a big way across Odisha. The prominent places include, Koraput, Kendrapara, Keonjhar, Baripada and Bhubaneswar.