Rajkumar MohantyPuri, July 27: Bada Danda, the venue of Rath Yatra became two huge rivers of devotees with one flowing up and another downstream to witness the Suna Besha of the new idols of the deities on the three chariots near the Simhadwar of the main temple on Monday.Amid several layers of security blanket over 15 lakh devotees thronged this pilgrim city to witness the most decorative Besha of Lord Jagannath, Balabhadra and Subhadra. 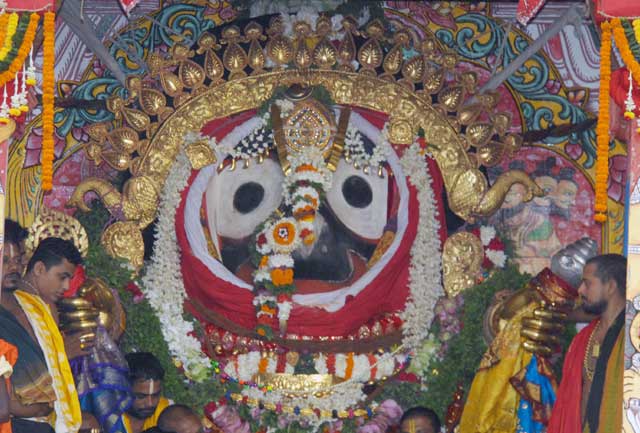 It was raining since morning till noon and weather became pleasant during the Besha darshan.Servitors began dressing the deities with huge ornaments at about 4.15 pm and the Besha was completed by 6 pm.For that they brought huge gold ornaments and jewelleries from the temple treasury to the chariots amid tight security.Gold ornaments of various type and style measuring about one hundred kilos were used to decorate the deities in complete gold.The ornaments include giant limbs like feet, hands and insignias like mace, lotus, wheel and conch.The huge gold tiaras besides a number of special necklaces and garlands presented a spectacular look.The deities too wear big Kundalas (earrings) in their earlobes besides chest guards all made of gold.The darshan of this special Besha would continue till late in the night.In the late night today the ornaments would be returned to the temple treasury by the servitors on duty.The administration had thrown a three layer security around the three chariots while the Suna Besha was in progress.Since early morning, hundreds of devotees started pouring into this city and their flow increased with every passing hour.They had to walk at least seven km from every direction to reach the Simhadwar.The administration banned all vehicles to the Grand Road and closed all entry points to the road while allowing devotees from municipal market square onwards to walk through the one km long entry barricades.The flow of devotees in hundreds through barricades went around the three chariots having the darshan of the Suna Besha then take U turn and return through exit barricades along the Grand Road which was fully illuminated. The residents particularly residing alongside the Grand Road were peeved at the faulty arrangements which compelled them to reach their houses taking circuitous routes and finally arriving at the same place with no entry instruction.The passes issued by the Superintendent of Police to the media persons were dishonoured by the police officers on duty.The pilgrims were further harassed as the 32 pilgrim shelters put up by the tourism department to provide shelter 80,000 pilgrims from July 17 to 27 at a cost of nearly 15 crore rupees were wound up by the contractors much before the Bahuda Yatra and during the rains pilgrims were frustrated and put to immense difficulties looking for shelter.The deities would spend three more nights on the chariots.Before entering into the sanctum sanctorum of the main temple called Niladri Bije they would be offered Adhar Pana, a special drink and then offered the Rosagolla bhog.