Odisha Channel Bureau
Puri, July 18: The Nabakalebara Rath Yatra of Lord Jagannath, Lord Balabhadra and Devi Subhadra began here this morning with performance of rituals relating to the annual car festival.Lakhs of pilgrims have converged on the Bada Danda (Grand Road), the venue of the annual festival.

The Nabakalebara Rath Yatra of the deities is being held after 19 years.

The ceremonial Pahandi procession was conducted as per schedule and the deities, in their Nabakalebara (re-embodiment), were brought outside the Sri Jagannath temple and taken to their respective chariots.

This would be followed Chhera Pahanra, sweeping of the chariots by Gajapati Dibyasingha Deb, the foremost servitors of the Lord.Shankaracharya of Puri Nischalananda Saraswati is also scheduled to visit the chariots to worship the deities.

The Chhera Pahanra which would begin by 2 pm is likely to be over by 3 pm.Thereafter the servitors would disengage the ladders and fix horses to the three chariots. At around 3.30 pm devotees would be allowed to pull the chariots one after another with Taladhwaja of Balabhadra first followed by Darpadalan of Devi Subhadra and Nandighosha of Lord Jagannath at the end. The pulling of the chariots will stop at the time of sunset. 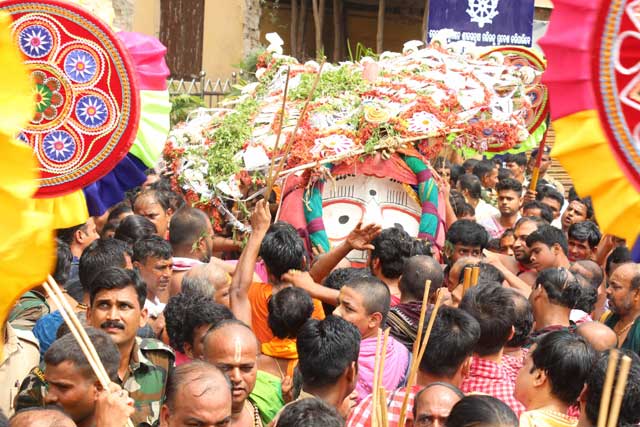 The deities would go to their aunt’s house Gundicha temple for a nine day sojourn riding these three Raths along the three km Bada Danda and. On their way, they taste the famous Podapitha baked by Mausi Maa. 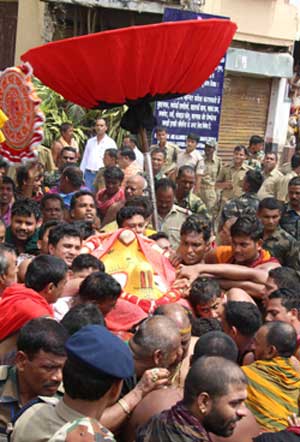 The authorities are hopeful that all the rituals connected with the Rath Yatra would be conducted as per schedule and the chariots would reach near the Gundicha temple by evening.

An unprecedented five layer security cover has been made in the city to ensure smooth conduct of the festival. This is the largest police mobilisation for any single event in the annals of Odisha police history, according to Inspector General of Police Soumendra Priyadarshi, the officer on special duty for the Nabakalebara fete.

Ten thousand strong police personnel of various ranks, several platoons of rapid action force(RAF), hundreds of security personnel of marine police, coastal guard air surveillance teams and navy patrol boats have been deployed in and around the Grand Road, beside nearly 1100 firemen with 85 fire tender machines for the fete.

Chief Minister Naveen Patnaik, Union Ministers Mahesh Sharma and Dharmendra Pradhan and many dignitaries are scheduled to remain present on the Grand Road to witness the Nabakalebara Rath Yatra. 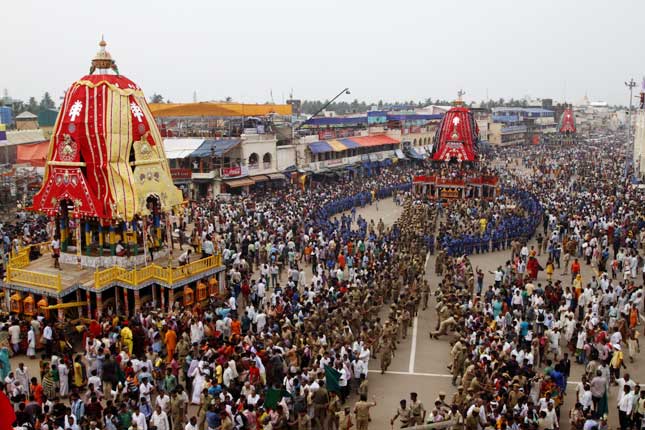 Many television channels are telecasting the Rath Yatra live.

The event is also being webcast by the temple administration.Senior police officials are monitoring the situation with the help of 200 CCTVs installed along the Grand Road and on its outskirts to ensure smooth conduct of the festival. The weather has remained pleasant and the Yatra of the deities is likely to be conducted smoothly, an official said.