Odisha Channel Bureau Puri, July 17: Lord Jagannath, Lord Balabhadra and Devi Subhadra are all set for their Nabakalebara Rath Yatra here on Saturday.The last Nabakalebara Rath Yatra of the deities was held in 1996.The deities were ready for the Rath Yatra after they were dressed in their Naba Joubana Besha with new attire today.This Naba Joubana Besha of the deities is organised every year a day before the annual car festival when the deities go to live at the Gundicha temle, their aunt’s temple.The deities appear in their Naba Joubana Besha of the deities at the end of their stay in the Anasara Ghara when they are considered to have taken ill.As per the High Court orders, no one except the servitors was allowed inside the Sri Jagannath temple for the darshan of the deities after their Naba Joubana Besha.Sources, however, said that family members of some servitors had darshan of the deities.Lakhs of devotees have already converged in this coastal Odisha town to witness the deities in their Nabakalebara (re-embodiment) during the Rath Yatra.As all hotel rooms were booked in advance, government agencies and voluntary organisations have made temporary shelters for the benefit of the lakhs of people reaching the town. Massive security arrangements have been made by Odisha police with the help of Central forces to ensure a trouble-free Rath Yatra festival.Hundreds of security personnel and traffic policemen have been deployed in and around Puri for smooth movement of traffic.While parking spaces have been created at various locations outside the main town for the buses and other vehicles carrying devotees, special parking lots have been created within the city limits for the dignitaries and invitees.East Coast Railway has made arrangements for running special trains to help devotees from far off places to reach Puri to witness the Rath Yatra. 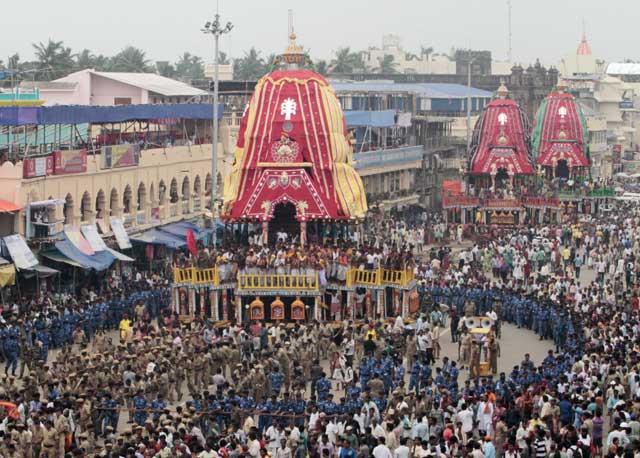 A fleet of buses have been kept ready at the new bus stand at Malatipatpur near the newly opened railway station for the benefit of the pilgrims. Numerous voluntary organisations and corporate houses have also opened free kitchens to provide food and water to the devotees.The administration has made all the arrangements to drain out rainwater from the Bada Danda (Grand Road) in case there is heavy rain during the pulling of the chariots on Saturday.The weather, however, has remained pleasant in Puri till Friday evening.