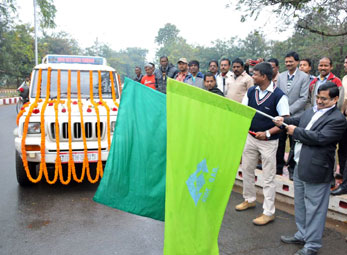 Odisha Channel Bureau Rourkela, Jan 2: An Animal Birth Control (ABC) Programme for stray dogs was launched in the steel township of Rourkela by G.S.Prasad, CEO, Rourkela Steel Plant (RSP) and K.Sudarshan Chakraborty, ADM, Rourkela today.The programme is being implemented by Rourkela Steel Plant (RSP) in association with Rourkela Municipal Corporation and Veterinary and Animal Husbandry Department, Government of Odisha.M.K.Das, ED (Projects) and S.K.Acharya, ED (Projects) of RSP, Durga Prasad Mohapatra, Municipal Commissioner, Ahindra Biswal, CDVO, P.K.Maharana, Nodal officer, ABC Project and Sangram Parida, Member, ABC Committee and many other senior officers of RSP, Government of Odisha and Rourkela Municipal Corporation were present on the occasion.Under this CSR initiative, RSP will be spending around Rs.20.50 lakhs in the first year of launching for development of infrastructure like construction of 30 kennels (20 for the operated dogs and another 10 for the sick or rabid dogs), an operation theatre along with specific infrastructure/equipment/instruments and provision of a dog catching vehicle.The training cost of the concerned personnel will also be borne by the Steel Plant.RSP will also provide support to Rourkela Municipality Corporation to meet the manpower cost of 3 dog catchers, one driver and one night guard cum attendant at the rate of Rs 2.88 lakhs per annum.According to an official release issued by the RSP, there are about 4500 street dogs in the steel township and the 5 year programme launched by RSP aims at sterilisation of 1000 dogs each year.After catching, the dogs will be taken to the Government Veterinary Hospital, Panposh, where the sterilisation surgery will be conducted.The dogs will then be kept in the kennel for 7 days for post operative care.Right ears of the operated dogs will be marked for future reference.The initiative will help in stabilisation of the stray dog population and rabies control, the release said.