Indian Men’s and Women’s Hockey teams, who have returned from the recently concluded Tokyo Olympics, are scheduled to be felicitated by the Odisha Government on Tuesday (August 17). 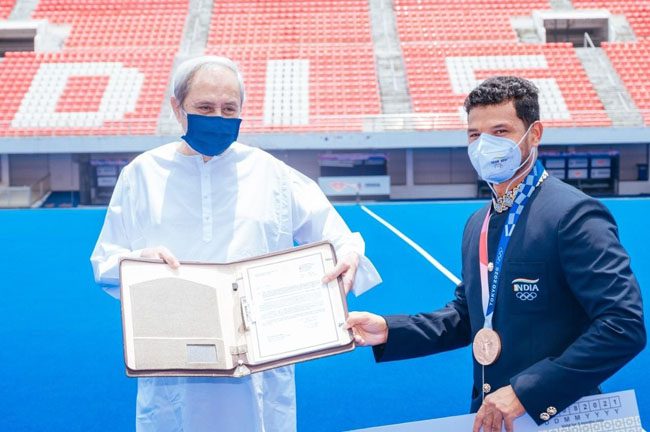 For that matter Prabodh Tirkey, another former Indian captain, followed the suit to find a healing touch, in cabins of Vaidyas (non-codified traditional doctors).

Neither hockey federation stood behind Dilip and Prabodh in difficult times then nor did their finance permit them to get treated by sports physician. Though injuries kept nagging, they played on following unproven and unscientific ‘trial and error’ medication.

But today when the grand exploits of the Indian Hockey teams has once again caught the imagination of the whole country, things have drastically changed behind the curtains.

Now, a hockey player or any athlete cannot afford to do that. They can walk into state-of-the-art Abhinav Bindra Targeting Performance Centre at Bhubaneswar and know which of his or her muscle has got spasm using advanced machines imported from Italy and what specific exercise is required to overcome the niggling pain.

The change in injury management is just one of dozens of transformations ushered in by the Naveen Patnaik Government in Odisha. But, the most crucial help extended by the State was sponsoring the Indian Hockey when it was bereft of patron.

As men’s and women’s hockey teams won matches and broke decades-old records in just concluded Tokyo Olympics, the country erupted in joy and hockey lovers’ cheering reached a feverish pitch in front of televisions. The loudest cheers, however, were reserved for Odisha and Chief Minister Naveen Patnaik. The reason was apparent.

Despite being a resource-rich State, Odisha has always been infamous for all wrong reasons – one of poorest States, land of child sale, supplier of cheap labourers and victim of natural disasters and so on.

In fact, Odisha was never known to be a society with strong a sporting culture barring Sundargarh district where hockey used to be played in villages with kids, mostly tribals, playing with sticks and balls made of cloth.

Spotting inherent talents among tribal youths in late 1980s, the then State government established a sports hostel at Panposh under guidance of a proper hockey coach. Some of players honed their skills in the process and later went on to shine in national and international scenes.

In November 2013, the State took a baby step to own a franchise in Hockey India League. The State and central public sector units such as Industrial Infrastructure Development Corporation and Mahanadi Coalfield Limited joined hands to create ‘Kalinga Lancers’.

While the State was trying hard to get rid of the perception of being backward, the announcement of owning a hockey team was termed as a misplaced priority by opposition leaders and activists.

However, the government took a determined step in an effort to establish itself as a hockey playing State, once and for all without a tether to the past.

Dilip Tirkey, who started his journey from rugged fields of Sundargarh to astro-turfs in international venues, was at helm of the affairs in the State’s attempt to foray into world of sports.

In fact, Odisha became the only State which had its own professional hockey club team – Kalinga Lancers – that participated in the Hockey India League and also emerged as champion in the last edition in 2017.

The tournament became instant hit with people queuing up before refurbished Kalinga Stadium braving the rain and heat. Never had there been a dull day during hockey matches irrespective local players playing the match or not. It was the time when the State government forged a close partnership with the hockey federation.

The Chief Minister, who was goalkeeper in his Doon School days, gave free hands to a group of trusted bureaucrats to let the game flourish in the State. Subsequently, the State hosted World League in 2017, FIH Pro-league and Olympic qualifiers.

In 2017, when neighbouring Jharkhand pulled out from hosting the Asian Athletics Championships meet at the last minute, Odisha jumped into fray accepting the challenge to prepare itself within 90 days. Earlier, it did not have even a proper track to host even national level championship.

On July 5, 2017, Patnaik inaugurated the championship at Kalinga Stadium, the biggest athletics event in the history of the State, in a dazzling ceremony. The hosting of the championship firmly put the State in global platform.

The sponsorship support of Rs. 150 crore over a five-year period was not a small amount. However, the government took the giant step ignoring the murmurs in the background. 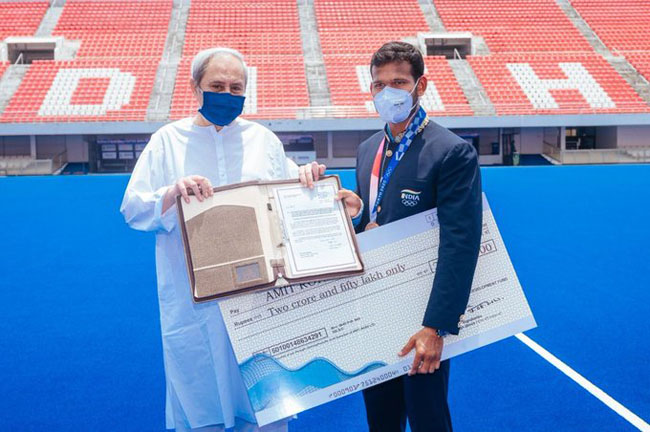 In India, States have been identified with different sports basing on their popularity in the region. But, never had a State government taken responsibility to support national teams.

Odisha did not take pause there. The State started pumping money into the game while ramping up hockey infrastructure. It was also the host for all the major International Hockey championships in the last few years including the Men’s World Cup in 2018. It is also set to host next edition of Men’s World Cup in 2023.

Preparations are in full swing to build India’s largest hockey stadium with 20,000 seating capacity at Rourkela for the World Cup at a cost of more than Rs 120 crore. According to Odisha government, this will be one of the most modern hockey stadiums in the world.

In foreign countries, players start playing hockey on astro-turfs from age of seven years whereas in Odisha players get to play on astro-turfs when they get selected in State level teams.

Keeping this in mind, Odisha is constructing 21 hockey training centres at a cost of Rs 200 crore along professional coaching programme at the grassroots. Seventeen of proposed centres will come up in Sundargarh – known as cradle of hockey.

Besides, Odisha has signed memorandum of understanding with companies managed by top sportspersons such as Abhinav Bindra, Pullela Gopichand and Anil Kumble. It has roped in corporate sectors to create partnership for achieving excellence in sports sector. Many of the centres have started functioning.

The step was applauded by the Parliamentary standing committee on education, women, children, youth and sports. In its collective wisdom it is appreciating the initiative and efforts taken by Odisha CM in setting up high performance sports centres and sponsoring Indian Hockey since 2018, which has translated into better performances by both these teams at Tokyo Olympics 2020, the committee observed.

“When I used to return to Bhubaneswar in late 1990s, I found it very difficult to get grass patch to continue my practice. My problem worsens further when I catch injuries. Several times in my sporting career, I have gone to traditional healers to get myself fit. It is hell and heaven difference between those days and now,” says Dilip Tirkey.

He points out, “the centres functioning in Kalinga Stadium help players stay away from injuries. Even if you are injured, the recovery time is minimal as experts with help of modern machineries can diagnose injury and make you fit quickly. Had it been available to us in those time, our performance would have been much better.”

“Odisha model is not a model of sponsorship alone. It is a model of partnership. This model emerges from the realization that if you want to achieve something big, it is very critical to create like-minded partnership,” says Krishna. 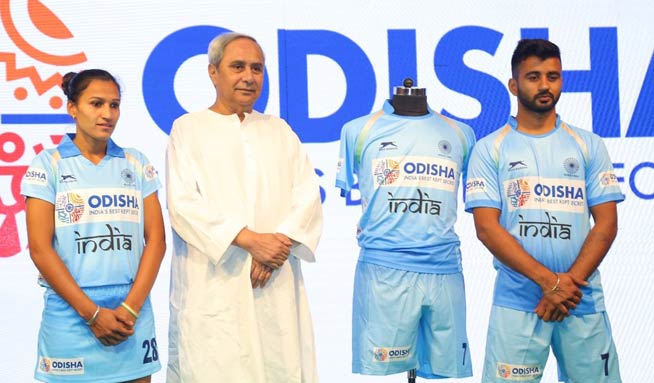 Stating that the government is good at creating infrastructures and that kind of money nobody will be able to put in, he says, “Hockey India is an important partner. We have corporate partner in shape of Tata Group. Tata Group has brought in Bovelander Hockey Academy from Netherland for coaching expertise. It is long term partnership.”

“Tata Group has provided best of the coaches. They take care of the nutrition. Sport is not about coaches’ or players’ passions. Sport is more of science. There is huge amount of nutrition and psychology-related knowledge and involvement of technology required. All these things can be brought together by private partner,” says Odisha’s sports secretary.

Why is Bhubaneswar preferred destination for sports events? Logistically, it helps Hockey India. In other major cities, the federation, if it chooses to organise an event, has to liaison separately with police, different departments and stadium authorities. But in case of Bhubaneswar, Odisha government has taken responsibility of organising sporting events. It helps teams focus on the game.

Dissenting voices on the ground

While Odisha’s passion with sports reaches new height every passing day, there are some dissenting voices on the ground too. Former hockey players express apprehensions that the corporate style of functioning may deprive hockey players from villages of natural progression to national level.

“The centres of excellence will come up at Bhubaneswar as well as Rourkela. It may have players drawn from other States. This could reduce chances of our players representing the State,” says a hockey player who plays for the Indian Railways.

Children in villages will be inspired to play the game if local heroes are recognized. Former players demand the government should involve them and make them stakeholders in hockey’s overall development.

Major hockey tournaments have been organised in Odisha for past seven to eight years. But, it has not been able to inspire any schools in Bhubaneswar to at least have a hockey team. By now, the State should have started its own hockey league to create interest among children and provide much needed match experience to hockey players. It has not been done so far, says an expert on hockey.

The government has provided Rs. 140 crore to Hockey India without even asking as to how the money is being spent. The benefits have not trickled down to players, he adds.

“The government is handling hockey’s development in very professional manner. People are stuck in the past and are not forward looking. During next four to five years, players from Sundargarh will definitely excel in professional hockey and bring laurel for the State,” Krishna says reacting to criticism.

Investment in the future

Apart from promoting hockey in a big way, Odisha has sensed huge opportunities in rugby and football. In 2020, Odisha signed an agreement with Indian Rugby Football Union (IRFU) to sponsor the Indian national rugby teams till 2023 and facilitate high-performance training and conditioning of the players. Rugby’s popularity is rising among tribal kids in rural belt.

“Moreover, the sponsorship will be extended towards training, conditioning and incentivising the Indian national rugby teams, both men and women, participating in international rugby events,” says Sports and Youth department.
Similarly, Odisha has established two important partnerships to positively impact the football ecosystem. It is now working jointly with the All India Football Federation and Delhi Soccer Private Limited.

Odisha has again become the first State in the country to own a professional soccer club by entering into an agreement with Delhi Soccer Private Limited to launch Indian Super League (ISL) club ‘Odisha FC’. The State aims to unearth future football stars.

Given the amount of sponsorship it gets, cricket can take care of itself. Other sports need patronisation. Odisha has taken an initiative of adopting sports. Other State governments, big corporates and the Central government can take a cue and help the country shine in big events like Olympics.