New coal chemical plant of RSP dedicated to the nation 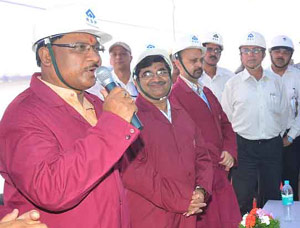 Odisha Channel Bureau Rourkela, Sep 1: Union Minister of State for Labour, Employment, Steel and Mines Vishnu Deo Sai dedicated the New Coal Chemical Plant of Rourkela Steel Plant (RSP) to the nation on August 30.CEO of RSP G.S.Prasad, Executive Directors, and other senior officers of the plant were present on the occasion.Sai, unveiled the plaque to formally dedicate the plant to the nation.“As per the vision of Prime Minister Narendra Modi to increase the steel making capacity of India to 300 million tonnes by 2025, the RSP Collective should make all out efforts to expand the capacity of RSP to 10 million tonnes as soon as possible,” Sai said addressing the gathering.Assuring the Minister that RSP Collective will live up to the expectations placed on it, Prasad said: “we are proud to be a part of SAIL which has always dedicated itself to the cause of the nation. We assure you that we will contribute our mite to fulfill the vision of the Prime Minister.”It is noteworthy that the new 7 metre tall coke ovens battery No-6 came up under the modernisation and expansion of RSP.To handle the raw coke ovens gas generated in this battery the new coal chemical plant was installed.This plant has been designed, supplied, erected and tested by the consortium of Messrs Shriram EPC, Kolkata and Messrs Hutni Project, Frydek Mistek, Czech Republic at a total cost of Rs.309.24 crores.The new coal chemical plant is designed to handle 50,000 metre cube per hour of coke oven gas generated in Coke Oven Battery No-6.The plant was taken into hot trial in the month of April 2013.In this new coal chemical plant, raw coke oven gas generated in battery no-6 is cleaned and the cleaned gas is being supplied to different units of RSP where it is being used as fuel.During the cleaning process, different valuable products like crude tar, ammonium sulphate, crude benzol and elemental sulphur are being generated as the by-products.