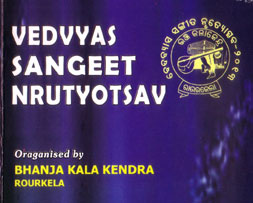 Odisha Channel Bureau Rourkela, Nov 5: The fourth day’s programme of the mega cultural event 17th Vedvyas Sangeet Nrutyotsav in this steel city of Odisha was a huge hit amongst the audience on Tuesday evening.The event is being organised by Bhanja Kala Kendra at the Bhanja Bhawan.Reputed artistes drawn from various corners of the country are presenting their performance in this five-day long extravaganza of dance and music.Braja Bihari Tripathy, GM & Business Unit Head, NSPCL graced the function as the chief guest on the occasion on the fourth evening.Speaking on the occasion, Tripathy said: “Music plays an important role in bonding people.It is essential to safeguard our art and culture with time.” He complimented the efforts made by Bhanja Kala Kendra in contributing for the cause. The audience in the evening were mesmerised with some beautiful Odissi Dance performed by Nupur Troupe of Bhubaneswar, followed by Ghumura Dance by Mahabir Sanskritik Parishad of Kalahandi and Sambalpuri dance by the artistes of Bhanja Kala Kendra.R.K.Mohapatra, General Secretary coordinated the inaugural function, while Aseem Behera welcomed the gathering.The third evening of the Nrutyotsav were enthralled by scintillating performance by eminent Odissi vocalist Nimakant Routray and eminent violin artiste of international repute R.Sridhar of New Delhi.J.K.Satpathy, Vice-Chancellor, BPUT graced the occasion as chief guest and inaugurated the evening.A K Singh, Director In-Charge (M&HS) was the guest of honour on the occasion.The mellifluous performance by Sridhar and Routray enchanted the atmosphere.The winners of the drawing competition held earlier by the organisation were also given away prizes in the evening.The dance performances on the second day of the Nrutyotsav kept the audience mesmerised with magnificent dance performance by professional artistes from Manipur, Puri and Punjab.The first performance of the evening was by eminent internationally acclaimed Manipuri dance artiste Poushali Chatterjee and her troupe.The dance performance depicting the Rashleela of Lord Krishna enchanted the atmosphere.It was followed by scintillating folk dance Sahi Nrutya performed by artistes from Raghurajpur which enthralled the audience.The last performance by the troupe from Gurdaspur, Punjab electrified the atmosphere.The Nrutyotsav got off to a glittering start at Bhanja Bhavan on Saturday.G.S.Prasad, CEO, RSP graced the occasion as chief guest and inaugurated the festival by paying floral tributes to Lord Jagannath and lighting the lamps amidst chanting of Vedic Slokas.The first evening witnessed some scintillating classical and folk dance performances like Odissi Dance performed by the artistes of Bhanja Kala Kendra, Kajari Dance by famed artistes from Patna and Bhangra Dance by internationally acclaimed troupe from Gurudaspur that has performed on various stages all over the world.