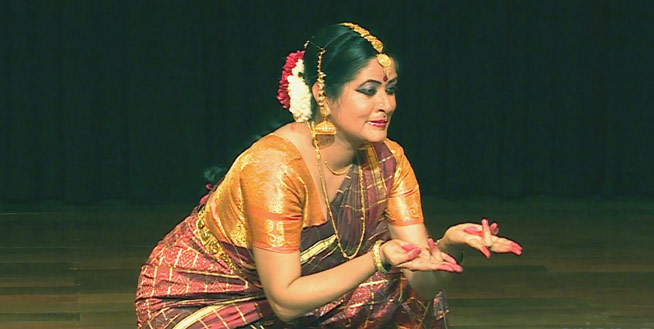 In her presentation, Purvadhanashree began with a Choornika in Raga Arabhi followed by a Jatiswaram in Raga Kalyani and Adi Talam. In her second performance for the evening, she performed the Kriti, Kreedati Vanamali, eulogising the various names of Lord Krishna.

Composed by 18th century poet Sadashiva Brahmendra, this presentation was set to Surutti Raga and Adi Talam. Purvadhanashree then concluded with two Ashtapadis from poet Shri Jayadeva’s Geeta Govinda. In the first Ashtapadi, Radhika Tava Virahe, the sakhi describes to Lord Krishna the anguish of Radha, who is separated from him, and in Pravesha Radhe, the sakhi cajoles a hesitant Radha to meet her beloved Lord at his house, where he awaits her.

While Radhika Tava Virahe was set to Ragam Vaasanthi, Chatusra Ekam, Pravesha Radhe was in Ragam Kosalam and Khanda Chapu. This was set to the music composition of M. Balamurali Krishna with a flute and musical interlude by G. Raghuraman.

Purvadhanashree’s technical prowess and depth of abhinaya shone forth in her presentation, making it an inspirational opening performance on the fourth evening. 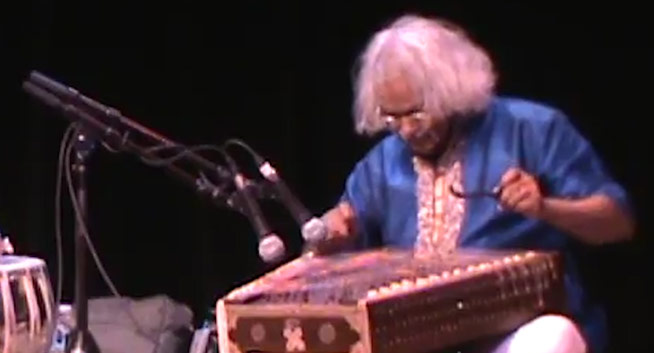 Srjan then hosted the recital of Pandit Tarun Bhattacharya, the Santoor maestro, who is credited with revolutionizing the Santoor and its style of play by broadening its utility in various traditional art forms.

He presented Raga Bageshri, exploring the various strains of the Raga, interwoven with the harmonious rhythm accompaniment by Shri Hindol Majumdar on the Tabla.

Known for his expertise in promoting the classicism of the Santoor with a modern approach and creating new Ragas in Hindustani music, Pt. Tarun Bhattacharya’s mesmerizing recital was a testament to his years of experience and professional excellence. Maya Krishnamurty, member of Srjan Ensemble was the emcee of the 2nd evening of the festival.

The penultimate evening of the 26th OMC Guru Kelucharan Mohapatra Award Festival thus presented yet another classical delight to audiences across India and abroad, who joined Srjan virtually in their celebration of Art.

On the final evening on Wednesday, Srjan will conduct the award ceremony, with Odisha Governor Ganeshi Lal presenting the coveted Guru Kelucharan Mohapatra Award 2020 to Raj Gopal Mishra, veteran cinematographer for his invaluable contribution and lifetime achievements to the world of Odia Cinema.

Prof. Lal will also present the Guru Kelucharan Mohapatra Yuva Pratibha Samman 2020 to Pravat Kumar Swain for Odissi dance and Himansu Sekhar Swain for Odissi music acknowledging their dedication to their art forms.
The finale features a much-awaited presentation by the Srjan ensemble. This year, Srjan will present Anweshanaa – a bouquet of neo-classical choreographs in Odissi dance, conceptualized and choreographed by Ratikant Mohapatra.

Beginning with an invocation to Lord Rama, Antara Rama, Anweshanaa explores the intricacies of neo-classical Odissi compositions with dances such as Tarana, and Rase Harim Eha. These presentations are followed by an obeisance to Lord Rama, with Sant Tulsidas’ bhajan, Shri Ramachandra Krupalu Bhajamana and conclude with the premiere of Chandrachooda Shiva Shankara, in veneration to Lord Shiva.

The entire festival (a five day-celebration from September 5th to 9th) has been curated and designed by Ratikant Mohapatra, with the programme execution by Debiprasad Mishra.