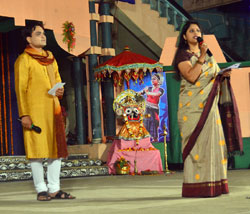 Odisha Channel Bureau Rourkela, Nov 6: The 17th Vedvyas Sangeet Nrutyotsav 2013 saw eminent artistes of international repute performing on the big open air Auditorium in the concluding evening on Wednesday.The festival that began on November 1 was a mélange of classical and folk dances.It brought the best talents in Kathak, Chau and folk dance to fore in its entire exuberance.M.K.Das, ED (Projects), RSP was the chief guest in the concluding evening.Speaking on the occasion, Das said, “It’s a matter of pride and joy that Vedvyas Sangeet Nrutyotsav has contributed immensely to promote the art and culture in the region in its journey of 17 years.Artistes coming from across the country and performing in this beautiful tiny city justifies the tag of Mini India for Rourkela.’’The souvenir of Bhanja Kala Kendra was released on the occasion by the Chief Guest.The concluding evening started with an enthralling Kathak performance by Pandit Jayant Kastuar, who is the former secretary and CEO of the Sangeet Natak Academy (India) and has travelled across number of countries and won accolades with his superb dance.He mesmerised the audience with his graceful movements and striking compositions, which was a visual treat in the real sense.He unveiled the splendid shades of Kathak in its all its glory.He was supported by Tapas Pal, Khitish and Akash from Bhubaneswar in Tabla, Vocal and Harmonium respectively.The next programme was a scintillating musical performance by the folk artistes Sangeet Bichitra from Rourkela.Earlier, Guru Binapani Rath and the students of Bhanja Kala Kendra recited a group Odishi song to a roaring applause.