Odisha Channel Bureau Rourkela, Aug 24: A large herd of wild elephants were spotted on the outskirts of this steel city on Saturday night creating panic among the people throughout the day on Sunday. The herd comprising 10 elephants was spotted at Bedabyas and efforts were being made by the Forest Department authorities to chase them away during night time. 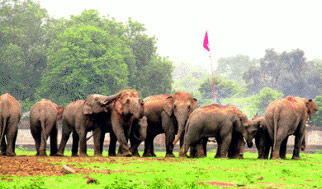 A large number people thronged the area during the day to take a glance of the elephants.According to forest officials, it was the same herd of elephants that had played havoc by entering the industrial town last year.Apart from many elephant experts, the help of local police will be sought to drive the elephants away from the city.Rourkela Forest Division in Sundargarh district has about 80 elephants living in the wild.