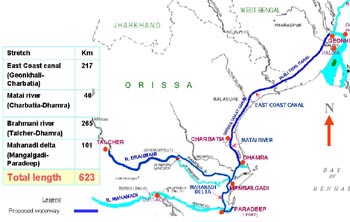 Odisha Channel Bureau Bhubaneswar, June 30: A memorandum of understanding (MoU) was signed on Monday between Inland Waterway Authority of India, Government of Odisha, Paradip Port and Dhamra Port to develop National Waterway No.5 in Odisha.The MoU was signed between Chairman of Inland Waterway Authority of India Amitabh Verma, Odisha Commerce and Transport Secretary G.Mathivatnan, Paradip Port Chairman Sudhansu Mishra, Dhamra Port CEO Santosh Mohapatra.The MoU was signed at the State Secretariat here in the presence of Chief Minister Naveen Patnaik.A brief presentation was made on the project by IWAI Authority.Among others State Commerce and Transport Minister Ramesh Majhi, Chief Secretary Jugal Kishore Mohapatra and other senior officials attended the function.IWAI has assessed that the development of the river stretch on National Waterway No.5 to be most ecnonomically viable and accordingly has taken steps to develop the project in two phases for facilitating the cargo movement through the waterway with a projected cost of around Rs.2000 crore.Speaking on the occasion, Patnaik said that that the organisations involved in the project will work in tandem to connect and develop the inland waterway between Talcher, Kalinga Nagar, Dhamra and Paradeep.This will provide water transport facilities to industrial hubs at Talcher, Angul, Kalinga Nagar, Dhamra Port and Pradip Port, he added.The Chief Minister said that the State Government will provide land free of cost and all possible assistance to fast track the project.The project is expected to be completed by June 2017.The waterway will provide an economical and environment friendly transport system.It would also help reduce the burden on existing road and rail network, Patnaik said.