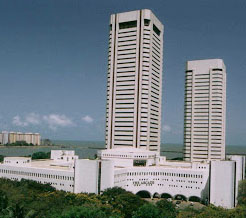 Odisha Channel Bureau Bhubaneswar, July 8: The World Trade Centre began its operation in this Capital city of Odisha on Tuesday.The commencement of operation of the WTC at Bhubaneswar was announced by Chief Minister Naveen Patnaik.The Chief Minister also laid the foundation stone of the Convention-cum-Trade Zone in Bhubaneswar on the occasion. This convention centre will enable holding international conferences, workshops, seminars, exhibitions and trade fairs, Patnaik said at the function organised to mark the occasion at the Janata Maidan of the city.A World Trade Centre having office and commercial spaces will be built beside the Fortune Tower and will form part of this facility.A 1.7 km sky-walk will connect the convention center to all the nearby hotels and the World Trade Center, Patnaik said.The project will be implemented in three years time with an investment of more than Rs.300 crore.“I understand that such a facility connected through a Sky Walk is a unique and first of its kind concept in India,” Patnaik observed.“I appreciate that with this facility, Bhubaneswar will be at par with the leading cities in India in the MICE (Meetings, Incentive, Convention and Exhibition) sector.The facility will significantly enhance and facilitate trade and commerce in Odisha.”“I am also glad to announce the commencement of operation of World Trade Centre, Bhubaneswar.This will be the fifth World Trade Centre to be operationalised in India and is being facilitated by World Trade Centre, Mumbai,” the Chief Minister said in his speech.“With the setting up of this World Trade Centre, Bhubaneswar will become the part of “One Global Network”, spanning 100 countries and 343 World Trade Centres across the globe.“World Trade Center, Bhubaneswar will act as a catalyst for local business and global organizations to network, explore new joint ventures and collaborations in technology and investment.“It will help promote entrepreneurship in the state in the domain of export-import, particularly in IT, Electronic Hardware manufacturing, metal based downstream and ancillary industries, handloom and handicraft, seafood processing industries and other export oriented initiatives,” Patnaik added.He expressed hope that the WTC would be a platform where the industry, academia and government would converge to stimulate trade and investment opportunities under the umbrella of World Trade Centre.The Convention-cum-Trade Zone facility will also create an urban landmark which shall give the city a new identity as a modern metropolis, he said.Among others, the function was attended by Minister Debi Prasad Mishra, Member of Parliament Prasanna Patsani, Chief Secretary Jugal Kishore Mohapatra, Industries Secretary Vishal Dev, and Executive Director of World Trade Centre, Mumbai Y.R.Warerkar