Odisha Channel Bureau Puri, Aug 24: About 1500 participants converged at a convention held here on Saturday to observe United Nation’s International Day for the Remembrance of the Slave Trade and Its abolition.Though slave trade was no longer an issue, Odisha still continues to grapple with the misery of social bondage.Millions of people are still forced to serve as bondage with a meagre annual allowance, locally called as ‘Bartan’, speakers at the convention observed.Acting Chairperson of Odisha Human Rights Commission (OHRC) Justice Bira Kishore Das inaugurated the function. 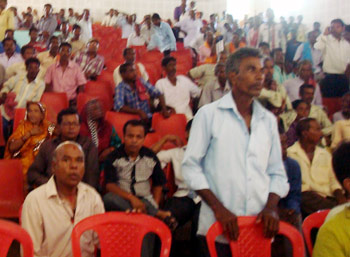 Addressing the gathering, Justice Das said that Dhobas and Barbers render valuable service to our society.But they are being forced to provide their service with a pittance.“Our laws have identified such forced extraction of services as ‘bondage labour’.For quick disposal of such practices and cases, the Executive Magistrates have been provided with judicial powers,” he said.Justice Das urged the administration to be receptive to complaints of bondage of this kind.He promised the participants that the OHRC will go all out to win the hearts of oppressed people whose basic human rights are being violated.Member of OHRC Bijayanand Patnaik said that the ‘Bartan’ system is a social bondage.Any work that is extracted forcefully results in violation of human rights.Laws have been enacted for abolition of bondage labour and Rules have been framed.But there are problem with implementation.He said that this problem can be solved through capacity development in the government administration; and enhanced knowledge and capacity of oppressed people.He suggested that government must start continuous trainings for the government officers so that they know about bondage labour and develop the right attitude and skills.Patnaik further said that if the oppressed people become literate and gain skills, many other livelihoods option will open up for them.That will automatically weaken the stranglehold of bondage labour, he added.Additional District Magistrate of Puri Uddhab Majhi said that Puri is the only district in Odisha which has already released 17 individual and families from ‘Bartan’ based bondage and provided ‘bondage free’ certificate.He informed that the District administration has received 3,500 applications for bondage free certificate.The Tehsildars have been given additional judicial power to investigate to quickly dispose of the petitions and also to deal with new cases of such type, he said, while adding that administration will cooperate with all initiatives aimed at bondage abolition.Earlier welcoming the guests and participants, Baghambar Patnaik, Advisor of Odisha Goti Mukti Andolan gave an overview of slavery and bondage.He said that the day gives us an opportunity to eradicate the evil, which is still prevalent in our society.Bondage labour still prevails in our society in various forms.He said that oppressed ‘Dhoba’ and ‘Barik’ communities of Puri have taken a lead role against ‘Bartan’ centric bondage which forces them to perform their service with a pittance.The movement is now spreading to other parts of Odisha.The event was jointly organised by Odisha Goti Mukti Andolan, International Justice Mission, Action Aid, and Civil Society Forum on Human Rights (CSFHR).