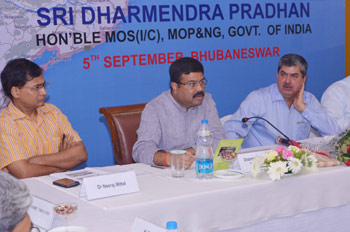 Odisha Channel Bureau Bhubaneswar, Sep 5: Petrol diesel and LPG network will be expanded with a view to benefit all the consumers in Odisha, Union Petroleum and Natural Gas Minister Sri Dharmendra Pradhan said here on Friday. After reviewing the work of Indian Oil Corporation (IOC), Hindusthan Petroleum Corporation (HPC) and Bharat Petroleum Corporation (BPC) and their marketing network in Odisha today, Pradhan said that the State has at present an LPG consumer base of 28 percent of the population.He said it will be increased to 33 percent this year and 50 percent of the household in next three years.At present the national average LPG consumer base is at 60 percent.The endeavour of his ministry will be to bring Odisha at par with national average.The Union Minister said that three new product pipeline would be constructed between Paradip-Ranchi, Paradip-Durgapur and Paradip–Raipur.The new pipelines will go through several areas of the state, which will carry petroleum products to the most parts of the State.Now the coastal centric distribution network of LPG, Petrol, and diesel will be widened and expanded to the nooks and corners of the state to achieve the national average.He said the existing LPG distribution centre network of 404 would be raised to 750 in next three years.The Union Minister said, new depots product pipelines, LPG terminals and inputted LPG terminals would entail en investment over Rs4500 crores.Pradhan said that Berhampur LPG terminal would be modernised and new depot would come up in Bhubaneswar.In addition to that more depots will be opened in South and Western Odisha.Balasore depot will be modernised under new expansion plan.The Minister said LPG distribution centres will be established within 15 km radius in all Gram Panchayats of Odisha.He said new expansion plan would create direct job to about 5,000 persons.Now more than 10,000 persons are employed in various petroleum projects of state run oil companies in Odisha.Reviewing the petrol pump network in the State, Pradhan informed that the state has 1449 petrol pumps working at present.Within next three years 300 more petrol pumps will be added to the network.The Minister said in the current network expansion will earn additional revenue for the State Government.Right now Odisha Government is getting Rs.2,500 crore revenue in terms of VAT and entry tax from petroleum distribution network.Pradhan said the grievance redressal system for LPG consumers in Odisha would be strengthened and be made peoples centric.He said a help line based on Odia language would be launched soon to benefit the consumers of the State.