Odisha Channel Bureau Bhubaneswar, Sep 12: Union Petroleum and Natural Gas Minister Dharmendra Pradhan on Friday inaugurated the automation facility simultaneously at all Indian Oil retail outlets in Bhubaneswar city by remote control on Friday.This has made the Bhubaneswar the first fully automated retail outlet city in Eastern India.The automation initiative is in line with the vision of Government of India to use technology to bring transparency at all levels for the benefit of customers. 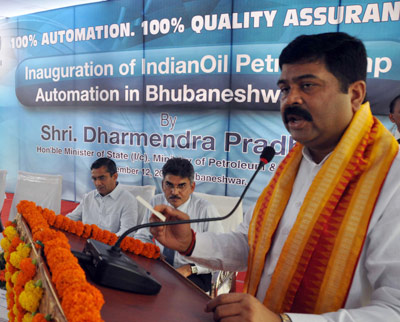 Addressing a gathering on this occasion at Nuagaon Chowk IOC retail outlet, Pradhan said the automation will dispel the doubts in the minds of the petroleum consumer and bring benefit to all.He said the best practices of customer care and services would be implemented in Odisha.Profit is not the prime motive, but customer satisfaction is the need of the hour, he added.Pradhan said automated system would help quick and effective customer grievance redressal due to availability of record for each transaction.In addition to that the automated billing would lead to an assured customer.The Union Minister announced that a toll free helpline in Odia language will be launched soon.Any consumer dissatisfied with the services of a retail outlet or any other petroleum outlet will be able to lodge his complaint in the Odia language based toll free helpline.Pradhan also urged the consumers and general public to use facebook and twitter handle to communicate freely with the State-run Oil utilities to vent their grievances.Indian Oil Corporation Chief B.Ashok said that IOC has launched the initiative of Automation of Retail Outlets to foster in a relationship for a lifetime with their Customers with a vision to maximize customer satisfaction and transparency in operations the automation system will go a long way in bettering the service standards.The concept of 100 per cent City Retail Outlet Automation is a key initiative launched by Indian Oil.In the current financial year, India Oil plants to automate more than 20 cities in the country, he added.Indian Oil has automated more than 6200 retail outlets as of August 2014, and has plans to automate more than 7500 retail outlets in the financial year 2014-15 in the country.The company plans to automate more than 10,000 retail outlets by 2015-16In Odisha, Indian Oil has automated 192 retail outlets and has plans to increase it to a total of 230 retail outlets in 2014-15.Bhubaneswar city has 18 IndianOil retail outlets and all are fully automated and is the first city in Eastern India to be declared fully automated.