All eyes on railways stations on Gandhi Jayanti 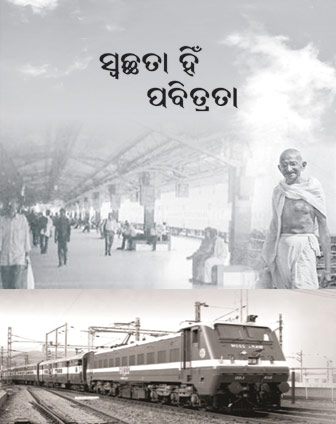 Odisha Channel Bureau Bhubaneswar, Oct 1: While all government agencies will carry out cleanliness and sanitation campaigns as a part of the Swachh Bharat (Clean India) Mission on Gandhi Jayanti, the scale and magnitude of the exercise in railways will be unparalleled.It is the largest government agency to be carrying out the campaign at more than 7800 railway stations all over the country at the same time.Preparations have started two weeks ago, but the formal launch of the campaign for total sanitation at railway stations will be launched on Thursday.All railway stations over East Coast Railway have been accordingly being spruced up.Officers have been nominated for each of the stations of the Zone.Eminent personalities including Union Ministers, Members of Parliament and other dignitaries from public life will be at the railway stations to launch the campaign.Union Minister Dharmendra Pradhan will formally launch the campaign at Bhubaneswar railway station, while the inauguration will be done by Minister of State for Civil Aviation P.Ashok Gajapati Raju at Visakhapatnam railway station.Members of Parliament have been invited by Union Railways Minister to grace the occasion at various railway stations.ECoR officials are leaving so stone unturned to put up a good show.Instructions of the Railways are to go for a comprehensive sanitation campaign.The functions at each station will be marked by a sense of dedication, responsibility and commitment to the call for Clean India-Swachh Bharat.Besides actual cleaning of the station by railway officials and volunteers, NGOs, etc., an awareness drive to educate the masses will also be launched.Pamphlets will be released on the occasion and distributed to the members of the public.Attractive stickers, banners and posters have also been prepared by railways for the occasion.Special focus will also be given on cleanliness of train coaches at originating stations.