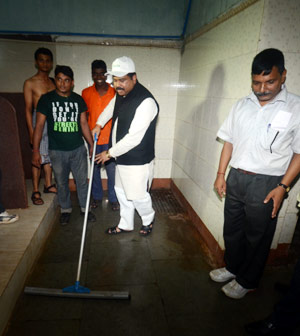 Odisha Channel Bureau Bhubaneswar, Oct 2: As the nation paid tributes to Mahatma Gandhi and Lal Bahadur Shastri on their birth anniversary and Prime Minister Narendra Modi launched the Swachh Bharat campaign in New Delhi, the Clean India campaign was also launched in Odisha in a big way on the occasion of Gandhi Jayanti on Thursday.Modi said that according to the World Health Organization, an average of Rs.6500 per person was lost in India due to lack of cleanliness and hygiene.Swachh Bharat would therefore make a significant impact on public health, and in safeguarding income of the poor, ultimately contributing to the national economy, he said, while exhorting people to devote 100 hours every year towards the cause of cleanliness.In Odisha, the Clean India campaign was launched at Bhubaneswar railway station by Union Minister Dharmendra Pradhan.Pradhan, who joined the campaign by personally taking up the broom, administered the oath regarding sanitation and cleanliness to the large public gathering at the station.Local MP Prasanna Patasani was also present on the occasion.Similarly, the Swachh Bharat Abhiyaan was launched at the Rourkela railway station by Union Minister Jual Oram.Hundreds of people attended the programme.A large number of employees and officials of the Airports Authority of India also joined the campaign and cleaned the areas in and around the new domestic terminal building of the Biju Patnaik International Airport in the city.Sub-committees were formed to supervise and ensure proper cleaning of all the demarcated locations with the help of AAI staff, CISF and Airlines staff.In line with Swachh Bharat Abhiyaan, various activities were also carried out by IndianOil Odisha State Office at its various units and sales points.The Swachh Bharat pledge was administered in Hindi, Odia and English at all the offices and locations of IndianOil in Odisha.Large number of employees and other stakeholders participated in the cleanliness drive at their locations and offices during the event. 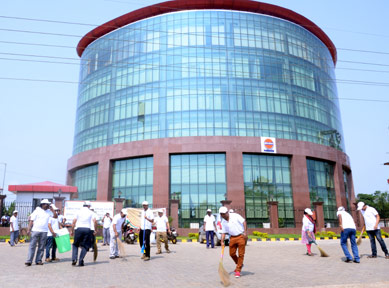 National Aluminium Company Limited (NALCO) joined the nationwide Swachh Bharat cleanliness campaign and undertook host of activities at its corporate office, and residential township in Bhubaneswar.As part of the campaign, NALCO also launched the construction of toilets at two more schools in periphery villages of its operating units at Angul and Damanjodi. It may be mentioned that NALCO has consented to be an active partner in this campaign launched by the Government of India, and has identified more than 150 schools for providing sanitation facilities.Swachh Bharat campaign was also launched in NABARD Odisha Regional Office on with enthusiastic participation of all staff through a cleanliness drive to make the office premises clean and litter free zone.All the staff of NABARD committed themselves to spread awareness on cleanliness in their personal and professional capacity.District Offices of NABARD also conducted awareness campaigns and launched cleanliness drives in their respective districts which witnessed large scale participation by rural folk.Swachh Bharat campaign was also launched by Rourkela Steel Plant authorities.G.S.Prasad, CEO, Rourkela Steel Plant (RSP) led a cleanliness drive along with other senior officers of RSP and office bearers of Rourkela Chamber of Commerce at the Banei gate chowk.A number of schools, community organisations and residents’ welfare societies of Odisha also joined the nationwide cleanliness campaign by cleaning their surroundings with enthusiasm.Odisha Government, however, completely ignored the nationwide Clean India campaign.While many Ministers were camping in Kandhamal Lok Sabha seat, where a by-poll is scheduled to be held on October 15, Chief Minister Naveen Patnaik took part in a padyatra organised by the ruling Biju Janata Dal to reach to the people to highlight the achievements of his government.