Odisha Channel Bureau Angul: With an aim to save the girl child, a 10 km long marathon cycle rally was organized in Angul city today.Around 2000 participants took part in the rally that started in the morning.October 11 is celebrated as the International Day for the Girl Child. 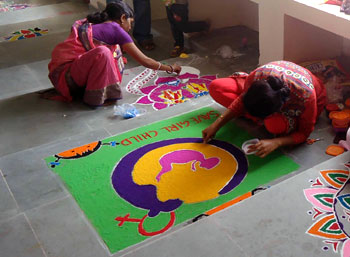 .The drive `Ananya Angul’ aimed at the protection and conservation of girl child will go on for one year with sustained campaign all through the district.It is the only district in the state that such a programme for the girl child has been launched.Attended by senior government officials like the deputy inspector general of north central range Jatindra Goel, collector Sachin Ramachandra Jadhav and Superintendent of Police Rajesh Pandit Uttam Rao, school children of about 20 educational institutions in the district besides others participated.Noted mountaineer Kalapna Dash flagged off the rally.“It was very pleasurable to go with hundreds of people on cycle in the morning for noble purpose.The time has come to balance the sex ratio not only in the district but also in the country,” said Manas Pradhan a participants and school student.‘The girl sex ratio according to 2011 was below 840 in Angul while the state average was at 900.AT some pockets in the district the ratio was very pitiable.So the campaign was necessary to create awareness among the people to save girl child in order to reverse the trend, said Jadhav.“We are also strengthening out enforcement agencies to stop all sorts of predetermination of sex in the district and will create such awareness so that the couple will not go beyond the district for sex test.We also plan to felicitate couple having girl child only in various functions to be organized in the length and breadth of the district in coming days, he added.