Odisha Channel Bureau
BHUBANESWAR: Voice for Child Rights in Odisha (VCRO), in collaboration with CRY – Child Rights and You, a leading child rights organisation, on Saturday launched a campaign, ‘Giving Children of Odisha A Healthy Start’, to address the issue of child health and malnutrition in five tribal districts of Odisha. 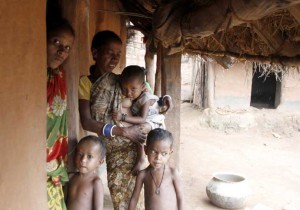 With almost 35% of total under-5 child population in the state under-weight, and 45% children in the same age-group suffering from anaemia, Odisha is one of the states which lag behind the national status of child health and malnutrition.

The scenario is even worse in tribal districts of the State, as data suggest. Despite the recent decline in infant and child mortality (IMR and U5MR), the State still fares poorly in comparison to the national estimate.

Keeping this ground-reality in mind, the aim of the six month long campaign will be to reduce the rate of child malnutrition below the National average, through increasing awareness and participation of the communities and concerned service providers at the village level, as stated by the organising NGOs.

The State Social Welfare Board and the Odisha Chapter of National Health Mission (NHM) welcomed the initiative by CRY and VCRO. They also expressed hope that this kind of awareness drives should be extended to the entire state.

“It’s significant that the campaign aims at coordination and convergence of government and non-government bodies to ensure health and nutrition for children and mothers,” Latika Pradhan, Chairperson of Social Welfare Board said.

She also advocated for children’s crèches at the village level, so that working mothers in the rural areas can avail the opportunity to ensure nutrition and care for their children.

“Even though we have resources, changing the mindset of people is the biggest challenge. Health and hygiene are important components in reducing malnutrition, and this campaign will go a long way towards building mass awareness and ensuring best practices among the communities,” Prasant Saboth of NHM said.

The campaign will reach out to more than 5000 children and 3000 mothers in 158 villages in 10 blocks of five backward districts, namely Mayurbhanj, Bolangir, Bargarh, Kalahandi, and Koraput, as the grass-roots level NGOs partnering CRY and VCRO will be involved in collection of data from the respective intervention villages to assess the nutritional status of children in the age group of 0-5 years.

Explaining the plan and modality of the campaign Ashim Kumar Ghosh, Chief of CRY operations in Odisha said, “The campaign is divided into two components. While the first includes growth monitoring of 0-5 years children in the mentioned districts and advocate for the development of malnourished children with the support of state agencies and communities, the second aspect aims at advocacy towards enhanced Implementation of Policy, Scheme, legislation and services at the grass root level on health policy for the mothers and children below 5 years.”

Elaborating the approach of the action-intensive campaign, Bidyut Mohanty, Convenor of VCRO said, “It will work on both responsive and preventive ways, with all respective stakeholders bringing them at one platform to operate at the village levels.”

“On one hand the campaigners will identify critically malnourished children to refer them for further treatment and ensure that the communities are better prepared to prevent malnourishment; and on the other the service providers will be roped in to enhance the quality of services with certain non-negotiable mandate from the State,” Mohanty added.