Santosh Patnaik
Visakhapatnam: The number of people affected by a mysterious infection with symptoms of epilepsy in Eluru town of Andhra Pradesh mounted to 340 on Monday.
Even as the cause of sudden outbreak of the disease baffles experts,

Chief Minister Y.S. Jagan Mohan Reddy rushed to Eluru, located between Visakhapatnam and Vijayawada, met the patients and their families and directed the officials to initiate measures to contain its spread.

The number of people currently receiving treatment was 157. One person died while undergoing treatment. 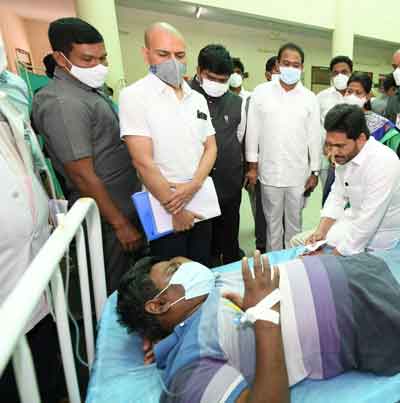 Fourteen people were shifted to Vijayawada and other places for better care. As on Monday, 168 were discharged. Of those affected, 180 were men and 160 were women.

The patients were seen with epilepsy for three to five minutes, which was only once and not repeated. They also developed symptoms forgetfulness, anxiety, vomiting, headache and back pain.

According to officials, so far, the illness was not spread from one person to another.
People from other areas, where Eluru Municipality water was not distributed had also fallen ill.

Cell count of 35 cerebral spinal fluid samples came back to normal and culture report was awaited. About 45 people had CT scans and results were normal.

After visiting the hospital, the Chief Minister held a review meeting with the officials on the incident. He told the patients and their attendants that all help would be provided.

The Chief Minister directed the officials to be vigilant and be ready to handle any situation. He enquired about the treatment being given to the patients who fell ill, and the measures being taken for the control of the situation.

Reddy also enquired about the possible causes of the outbreak and about the medical tests and investigations that were being carried out on patients.

The Chief Minister said the observations of further analysis done by the teams of National Institute of Nutrition (NIN) and Indian Council of Chemical Technology (IICT) along with All India Institute of Medical Sciences (AIIMS) should be taken into consideration. The Chief Minister enquired about the health status of the patients being discharged and said they should be kept under observation and instructed the officials to provide quality food and best medicines to the discharged patients.

He said a high-ranking official of the Health Department should stay put to monitor the situation. He instructed the officials to create awareness among the people to call 104 and 108 if anyone faces any problem. Medical assistance should be provided as early as possible once the call is received.

The officials told the Chief Minister that drinking water was tested and reports of blood samples of the patients were normal.