Santosh Patnaik
Vijayawada: After the Opposition parties took up an agitation against a spate of incidents involving desecration of temples across Andhra Pradesh, the ruling YSR Congress Party seems to be on a firefighting mission.

Telugu Desam Party and Bharatiya Janata Party have launched separately Statewide campaign against what they termed communal politics by the ruling party. 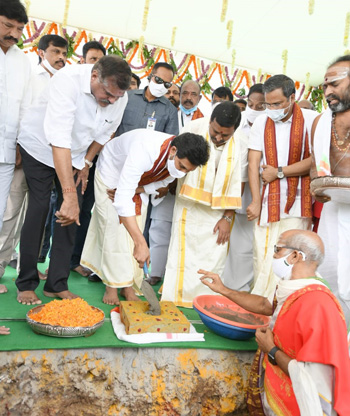 Chief Minister Y.S. Jagan Mohan Reddy, who is on a damage control mode on Friday laid foundation stone at Seethamma Paadalu on the banks of Krishna river for reconstruction of nine temples that were demolished during the previous TDP Government.

The Chief Minister also laid foundation stone for other eight development works of worth Rs. 77 crore in Kanakadurga Temple at Vijayawada. He unveiled two separate plaques at the construction site of the Shaneeswara Swamy temple.

Later, he visited Kanakadurga Temple atop Indrakeeladri. Temple priests blessed the Chief Minister with vedic hymns and presented a memento, photograph of the presiding deity Goddess Kanaka Durga, and prasadam.

The government has also commenced probe by CID into the recent damage to the idol of Lord Ram at 400-year-old Kodanda Swamy temple at Ramateertham in Vizianagaram district.

Reddy had blamed ‘political guerrilla warfare’ and asked partymen and officials to counter sinister design to divert attention of public from real issues.