We are giving plot worth Rs. 7 lakh free to poor: Jagan

Santosh Patnaik
Vijayawada: AP Chief Minister Y.S. Jagan Mohan Reddy on Monday unveiled the pylon for the YSR Jagananna Colony besides distributing house site pattas under ‘Pedalandariki Illu’ scheme at Urandur in Srikalahasti of Chittoor district and tore into the Opposition for creating hurdles to the project at some places.

Addressing a meeting, the Chief Minister stated that the government is handing over a plot worth of Rs 7 lakh free of cost to the beneficiaries, with a sole intention to create an asset for the poor families. 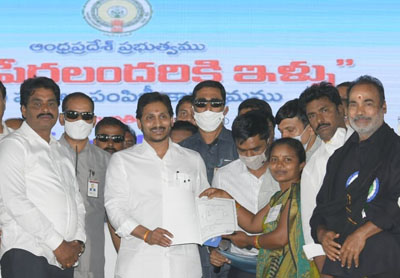 In Chittoor district alone, in the first phase, 1,78,840 houses will be constructed, while 2.50 lakh house pattas will be distributed.

He said that about 30.75 lakh beneficiaries have been identified across the State, of which 28.30 lakh houses will be constructed under YSR Jagananna layouts in two phases and another 2.62 lakh are of TIDCO flats.

“While such a welfare activity is going on, the Opposition is deriving vicious pleasure by stalling the project through litigation and even filed PILs on the eve of launch and deprived many people including those of Pulivendula of getting the benefit. God will teach them a fitting lesson,” he said.

Reiterating that the State is not constructing just houses for poor, but is constructing towns for the future fulfilling all necessary requirements, the Chief Minister said that the government has been taking effective measures in empowering women and supporting them at all times. In the past 18 months, Amma Vodi, Cheyuta, Vidya Deevena and Vasati Deevena have been rolled out by directly crediting the amount to mothers’ bank accounts.