Santosh Patnaik
Visakhapatnam: Spate of desecration of temples in Andhra Pradesh is leading to a bitter fight between the ruling YSR Congress Party and main Opposition Telugu Desam Party.

The last week’s beheading of the Lord Ram idol at Ramatheertham in Vizianagaram district at a 400-year-old temple has led to throwing of challenge and counter-challenges between the two warring parties.

Reacting over allegations levelled by the TDP and BJP-Jana Sena combine has led to Chief Minister Y.S. Jagan Mohan Reddy breaking the silence on Monday. In a video statement, he said the Opposition had tried to spread canard against him to derail progress and stall development by levelling sweeping allegations against his government. 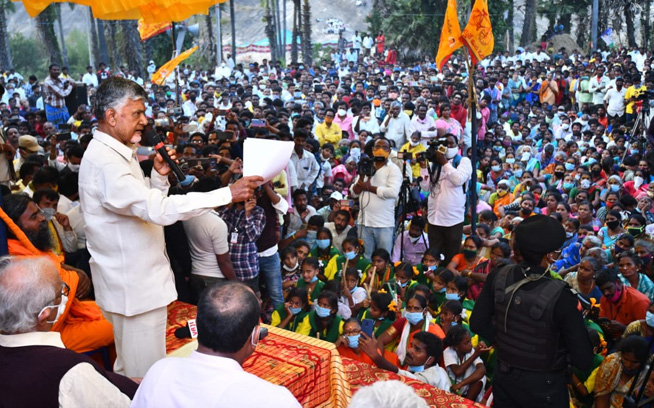 He said coinciding with his visit to Vizianagaram to take part in housing project launching, his detractors had indulged in vandalising the famous temple at Ramatheertham. “There is a definite game plan before every incident of attack on temples,” Reddy alleged.

Hours before Naidu’s visit to Ramatheertham, YSR Congress Party national general secretary and MP V. Vijayasai Reddy was allowed to visit the temple and hold a meeting. On the other hand, Naidu was allowed to trek the hill to reach the temple only after Reddy’s departure. An attempt to murder case has also been registered against former Civil Aviation Minister P. Ashok Gajapati Raju and other TDP leaders for allegedly trying to attack convoy of Reddy on the basis of a complaint lodged by him at Nellimarla Police Station.

In a hard-hitting speech, Naidu attributed motives to the ruling party behind the spate of attacks and demanded a CBI probe into the incident to expose those involved behind the heinous incident.

TDP chief said that the demolition of idols at the four-century old Ramatheertham temple was certainly a result of the total negligence of the ruling party. For reasons not known, the Chief Minister was just watching the attacks on temples like a silent spectator. In the last 19 months, over 120 attacks took place on temples. These attacks were going on as per a premeditated plan.

Reacting to the criticism made by Naidu and his MLC-son Nara Lokesh, general secretary of TDP, several Ministers levelled serious allegations against the TDP chief saying he along with his son was stopping down to the level of engineering attacks on temples to gain cheap publicity and mileage keeping an eye on elections.

However, under the pretext of prohibitory orders they were not allowed to climb the hill. BJP leader and MLC P.V.N. Madhav strongly condemned the discriminatory treatment being meted out to them. He questioned the reason behind removal of their camp at the hilltop and arrest of 30 activists at midnight.

The panchayat elections were postponed by the State Election Commissioner NImmagada Ramesh Kumar in March citing Covid-19 pandemic without consulting the State Government which subsequently led to reduction in his tenure by promulgating an Ordinance. However, he was reinstated later following a court order. Though Ramesh Kumar wanted to hold the elections in February, the government passed a resolution in Cabinet not to permit elections due to threat posed by the pandemic mainly in the wake of threat of a second wave warning issued by the Central Government.