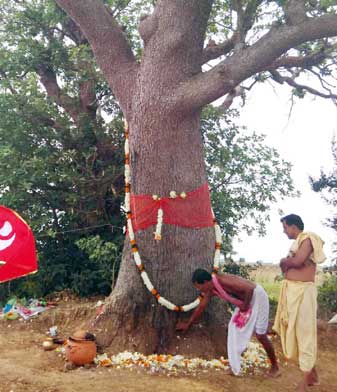 Odisha Channel Bureau Bhubaneswar, April 13: The neem tree (Daru) for carving out the idol of Sudarshan has been located at Gadakuntunia village near Hirapur on the outskirts of the Capital city.Thousands of people have gathered to see the Daru after the Shri Jagannath Temple Administration made a formal announcement in this regard late on Saturday night.The administration with the help of police has put up barricade surrounding the tree to prevent people from going near it and causing any damage to the Daru.The Daitapatis comprising the Banajag team have reached the spot and the process for conducting a Yajna near the neem tree has started.The Banajag team will shift to stay near the Daru identified for Sudarshan from April 14 and the two-day-long Yajna will begin from the next day.According to Suresh Mohapatra, chief administrator of the temple administration, the Daru for Sudarshan idol will be cut to be taken to Puri on April 19, after the Yajna is conducted by the Banajag team as per the traditional procedures.Though the Darus (neem trees) for carving out of the idols of Lord Jagannath, Balabhadra and Subhadra have been identified, formal announcement regarding location of those trees will be made after a few days.The Banajag Yatra had started from Puri on March 29 and after the team reached the Deuli mutt at Kakatpur, the search for the trees started a week ago.The team had seen over 100 neem tress to finally select the four Darus for the Nabakalebara of the deities in July this year.