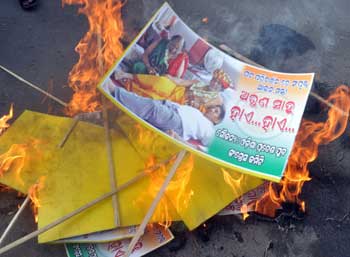 Rajkumar MohantyPuri, June 25: Three Badagrahi Daitapatis, entrusted to perform the Brahma transfer of the holy triads assured all Jagannath lovers and devotees that Brahmas (souls) of deities are safe, secured and taken out as per the prescribed tradition from the old idols and placed in the Brahmarandras of the new idols.After observing that the administration is bent upon to punish the guilty Daitapati, the Badagrahis come out to support their brethren and to mitigate growing hatred against the Daita community over June 16 Brahma Parivartan fiasco and ongoing agitation programmes of political parties.Admitting delay in observance of the ritual, Haladhar Dasmahapatra, Jagannath Swainmahapatra and Ramchandra Dasmahapatra, the Badagrahi Daitapatis of Lord Balabhadra, Lord Jagannath and Devi Subhadra respectively expressed regret over the delay.They attributed the cause of delay to their infighting and to Biswakarmas for the additional delay in carving of images of deities on Darus and further delay in timely observance of regular rituals which were running behind the schedule for hours together.The key to the temple door was handed over to them at 4.30 am on Tuesday.As the Brahma transfer ritual takes about ten hours there was delay of over twelve hours, the Daitapatis said.Jagannath Swainmahapatra said: “We have never expected that devotees particularly the residents of Puri would react so intensely blaming them and overwhelmingly supported Puri bandh call given by the Puri Bar Association on Wednesday.And the anguish of devotees across the state is visible.They decried the attempt to politicise the entire Brahma Parivartan issue.Addressing a press conference, the Badagrahi Daitapatis said they would try to conduct the Rath Yatra smoothly to salvage their respect.Over the suspension of two Daitapatis by the temple administration following statements of the Badagrahis who pointed out in their statements with the temple chief administrator that Kasinath Dasmahapatra and Jayakrushna Dasmahapatra, the father son duo, for creating trouble during the Brahma Parivartan ritual causing inordinate delay, they said since Daitapatis belong to one community and perform their religious service in collective form and they would solve the issues amicably within our community.“We would rally behind our brothers,” said Jagannath Swainmahapatra who said he does not have good relations with the temple chief administrator Suresh Chandra Mahapatra for last so many years.The Badagrahis admitted that some Daitapatis took mobile phones into the temple but not to the Brahma Parivartan room.It seems that the Daitapatis and the temple administration are heading for a fresh tussle and more disturbances are expected as the Daitapatis said they would support the suspended Daitapatis.Nabakishore Patimahapatra, the Badagrahi Daitapati of Sudarshan who first disclosed about the happenings during the Brahma Parivartan ritual and named the Daitapatis responsible for this fiasco, was conspicuous by his absence.On the other hand, Youth Congress activists staged a demonstration in Bhubaneswar demanding resignation of Chief Minister Naveen Patnaik and Law Minister Arun Sahoo over the mismanagement in the Brahma Parivartan.