Rajkumar MohantyPuri, July 18: As many as five devotees died during the Nabakalebara Rath Yatra of Lord Jagannath here on Saturday, while six persons were battling for lives in different hospitals.Two women devotees died and five others were injured in three separate stampedes during the pulling of Taladhwaja chariot of Lord Balabhadra. 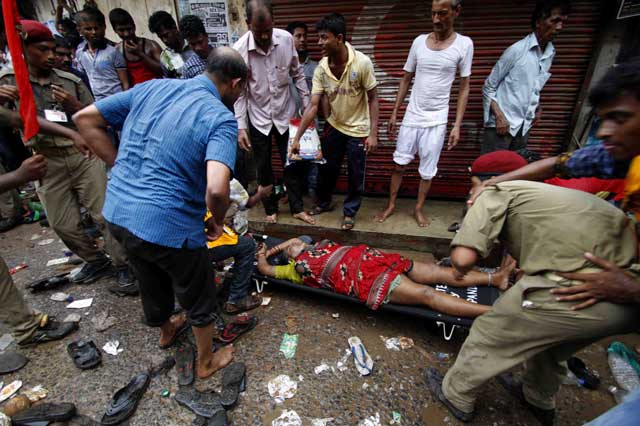 Two devotees died as they fell from a running train and another seriously injured was rushed to hospital for treatment.This apart, another youth was drowned in the sea while taking holy dip.According to reports, the first stampede occurred at about 5 pm while Taladhwaja was being pulled on the Bada Danda (Grand Road).At Hindi school along the Grand Road about thirty people fell down while others trampled over them killing one on the spot, while another was received dead at the hospital and two seriously injured were sent to SCB medical college and hospital as their condition became critical.In another such incident near Marichikot Square two women were injured and were being treated at the Puri hospital.In yet another stampede at district headquarter hospital square one male devotee aged about 60 was critically injured when he fell down and others trampled him.He was sent to SCB medical college and hospital at Cuttack.This apart one youth identified as Sunand Rout of Anantpur of Kendujhar district died by drowning in sea, according to the police.Four deceased and all injured persons were yet to be identified as none from their family or friends came searching them.Of the two deceased women, one is aged about 65 years the other one is about 45 years old.Around 12 lakh devotees converged in this pilgrim city to participate in the Nabakalebara Rath Yatra of the Lord Jagannath, Lord Balabhadra and Devi Subhadra and Sudarshan who went out riding the three Raths along the three km Bada Danda on a nine day sojourn to their aunt’s house Gundicha temple. 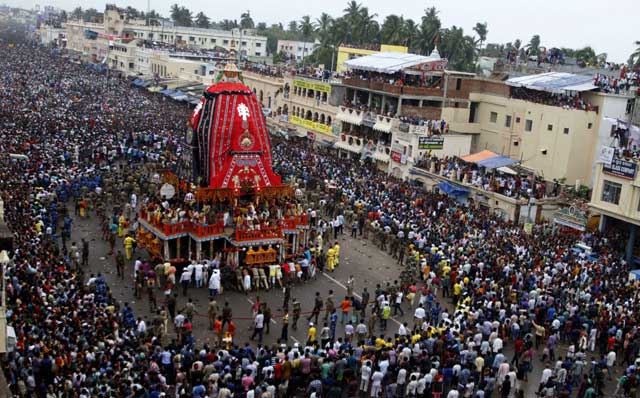 Despite tall claims by the state police regarding high tech crowd management system for the entire city through CCTV monitoring from an integrated control room at least three stampedes occurred.The administration, expecting congregation of 30 lakh devotees, had deployed 45 platoons of policemen for crowd control.But the stampedes could not be averted and two precious lives were lost.Everything was progressing as per the given time frame and all the necessary set of rituals of the deities were observed on time.Early in the morning Daita servitors conducted the ceremonial Pahandi of the deities within the prescribed time frame.The Chhera Pahanra on the three chariots by Gajapati Dibyasingha Deb and darshan by the Shankaracharya was also completed on time.Taladhwaja of Lord Balabhadra first rolled out at about 3.35 pm as per the schedule followed by Darpadalan of Devi Subhadra and about 5 pm Nandighosha of Lord Jagannath was pulled by the devotees.All the three chariots, except Taladhwaja of Balabhadra could not reach their destination Gundicha temple gate.The pulling for the day was suspended by the administration and would be resumed on the Sunday morning.While the Taladhwaja reached at Gundicha temple gate, the Darpadalan of Devi Subhadra is at Badasankha and Nandighosha of Lord Jagannath is near Balagandi.