Rajkumar Mohanty
Puri, July 31: A large number of devotees particularly the local residents witnessed the Pahandi procession in which the deities were taken inside the main temple at the end of the Nabakalebara Rath Yatra on Thursday night. This homecoming ceremony of the deities is called Niladri Bije.The Daita servitors escorted Ramakrushna, Madanmohan followed by Sudarshan, Balabhadra, Subhadra, and in the end Lord Jagannath into the sanctum sanctorum of the main temple.Jai Jagannath, Haribol, ululations (hulahuli) marked the home coming of the Trinity. 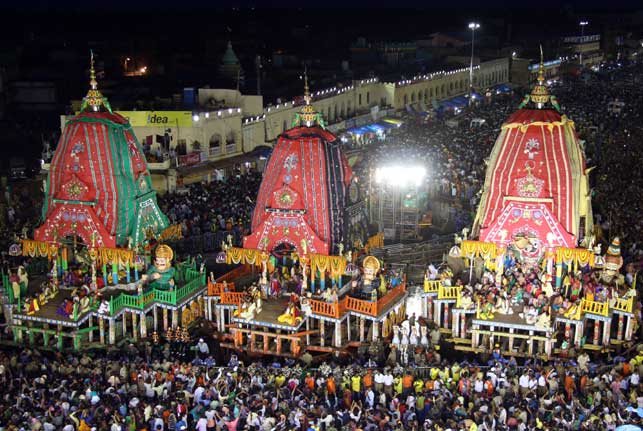 Early morning priests performed the daily chores of the deities atop the three chariots and offered fruits as bhog.In the evening the Sandhya Aarati was performed while Sandhya Dhupa (supper) was presented to the deities.Then servitors fixed ladders to the three Raths to facilitate Pahandi.Scores of musicians playing gongs, cymbals, trumpets, bugles and conch the Odissi and Gotipua danseuses led the Pahandi procession as spectacular display of fireworks enthralled the devotees.

Enactment of a traditional play between the servitors of Lord Jagannath and Mahalaxmi was held before the Lord entered into the temple.Mahalaxmi, the consort of the Lord, was aggrieved as she was left in the pleasure trip to the Gundicha temple.She closes the temple gate on the face of the lord while allows the elder Balabhadra and Subhadra and Sudarshan into the temple.Lord then offers Mahalaxmi rasagola to appease her and to forgive him. After a long persuasion she allows him inside.Devotees taking clue from the Lord offered hundreds of quintals of rosagolas to the deities and distributed among the devotees present.

This was the only occasion when rasagola is offered to the deities.Normal rituals and rituals of the deities resumes as soon as the deities were installed on the Ratnasimhasan of the Garbhagruha.Their nitee begins with observance of Mahasnan (the grand bath) followed by Badasinghar (night dress) and Pahuda (sleeping).The first cooked bhog offering would be made on Friday.Since this would be the first bhog of the new deities in the main temple a rush for the Mahaprasad on the Friday is expected.