Rajkumar MohantyPuri, July 26: Over five lakh devotees from across the country and abroad witnessed Lord Jagannath’s Nabakalebara Bahuda Yatra, the return car festival of the deities, here today.The devotees braved the rain to take part in the Bahuda Yatra which was held amid tight security. It was raining in the coastal Odisha town since Saturday evening till 3 pm on Sunday and sky was thick with clouds.The devotees, however, waited for hours outside the cordon of the chariots in front of Nakachana Dwar, the exit gate of the Gundicha Temple, to witness the Pahandi procession of the deities.As soon as the deities came out of the gate Haribol, Jai Jagannath and ululations reverberated in the air transforming the entire Gundicha temple area into a divine atmosphere.The religious ecstasy reached to zenith while Lord Jagannath came out of the gate swinging his giant tiara taking huge gallops while the musicians were playing Ghantas, cymbals, drums, conch and trumpets. 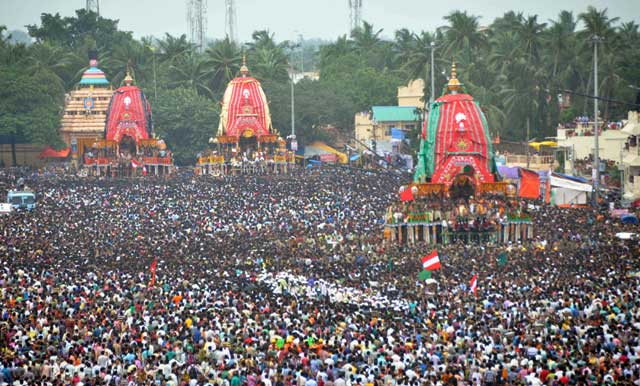 The Odissi dancers were leading the Pahandi procession dancing to the tune of the music concert, while Gotipuas and Banati players dedicated their skill to the Lord.On the Sunday morning, the Daita servitors, after offering of Gopal bhog khichidi to the deities in the sanctum sanctorum of the Gundicha temple, escorted them to their respective chariots in Dhadi Pahandi, when all the deities were escorted in a line to their chariots.All the nitees of the deities were performed on time.The Pahandi began with Sudarshan at about 10.40 am followed by Balabhadra, Subhadra, Ramakrushna and Madan Mohan.The Pahandi was completed before 3 pm.Gajapati King Dibyasingha Deb performed Chhera Pahanra, sweeping around the deities atop the three chariots with a gold broom), which was completed by 3.30 pm.The first chariot Taladhwaja of Balabhadra rolled out at about 4 pm and Darpadalan of Devi Subhadra at 4.45 pm.At 5.15 pm the Nandighosha chariot of Lord Jagannath was pulled.Taladhwaja and Darpadalan reached the destination Simhadwar (Lion’s Gate) at about 6.30 pm, while Nandighosha was trailing with a fractured wheel and brake of the Nandighosha Rath.The carpenters and blacksmiths were working on war footing to repair the chariot so that it could be parked near the Gajapati King’s palace along the Bada Danda hundred meters away from Simhadwar for observance of Laxmi Narayan Bheta ritual.On Monday, the Suna Besha of the deities would be observed on the three rathas.Rajkishore Swain, a devotee of Nayagarh, who was part of a 15-member Keertan group, fell down while performing Keertan.Volunteers rushed him to district headquarters hospital where doctors declared him dead.Kumbharpara police registered a case and sent the body for post mortem, while investigation was on.