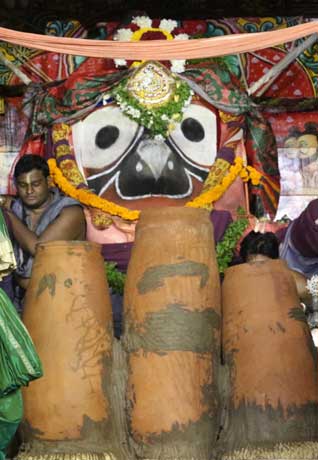 Rajkumar MohantyPuri, July 28: Lord Jagannath, Balabhadra and Devi Subhadra were offered Adhar Pana, a rich drink on the chariots parked outside the Sri Jagannath temple late on Tuesday evening.The drink after bhog to the deities is considered most sacred and holy.Lords dedicated the entire drink for the Mokshya of ghostly bodies.After nine day sojourn to the Gundicha temple, the Trinity on Saturday arrived at the Simhadwar of the main temple.On Sunday famous Suna Besha of the deities was observed on the chariots.On Tuesday as per the norms of the Adhar Pana ritual, nine large open mouth barrel shaped pitchers with at least one metre height full of drinks, popularly called Adhar Pana, were placed before the three deities on the chariots (three each on each chariot) touching the lips of the deities.The drink was offered to the deities through Sodosha Upachar Pooja performed by the priests.This ritual continued till late in the night.Soon after this offering these earthen pitchers were smashed on the chariots spilling the entire drink on the floor of the decks.It is believed that numerous spirits, ghostly bodies and souls trail the lords during the Rath Yatra eagerly wait for this moment to get Mokshya by drinking the holy drink.A large number of devotees assembled around the chariots eagerly waiting to get the holy drink.As soon as it spilled many devotees collected the Adhar Pana in earthen pots from the under belly of the Raths.The deities would remain on the chariots and would enter into the main temple’s sanctum sanctorum on the Monday night in ceremonial Pahandi procession to be conducted by the Daita servitors.Before entering into the temple, the deities would be offered Rasagola bhog on the chariots.The deities would enter into the sanctum sanctorum of the main temple on the Thursday.The ritual is called Niladri Bije.