Odisha Channel Bureau Puri, July 11: With just a week left for the Nabakalebara Rath Yatra of Lord Jagannath, this coastal of Odisha is getting prepared for the festival which is likely to be attended by nearly three million devotees from around the world.The 11-day-long festival would begin with the Rath Yatra on July 18 and come to an end with Niladri Bije, when the deities would enter the Sri Jagannath temple.The last Nabakalebara festival was held in 1996. 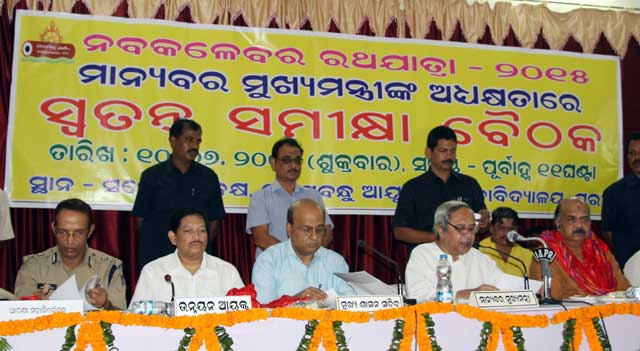 Chief Minister Naveen Patnaik reviewed the preparedness for smooth conduct of the festival at a high level coordination meeting held here on Friday.The meeting reviewed the preparations for the Rath Yatra and other related rituals.Several Ministers, top officials of the State government and police attended the meeting.All the issues including timely completion various projects, security arrangements, traffic arrangements, deployment of doctors and paramedical staff, drinking water and electricity supply were discussed in the presence of Patnaik.The Chief Minister expressed hope that the Rath Yatra festival will be conducted smoothly.Meanwhile, all other arrangements for the Nabakalebara Rath Yatra are going on in full swing.The construction of the three chariots for Lord Jagannath, Lord Balabhadra and Devi Subhadra are in progress.Since mismanagement had taken place during Brahma Parivartan of the deities last month, the State government is taking a series of measures to ensure smooth conduct of the rituals during the forthcoming car festival.