“The biggest challenge before all of us today and especially for my younger friends is – how to strengthen governance and instill public service – in turn strengthening democracy,” said Patnaik while addressing the 8th Bharatiya Chhatra Sansad (Indian Student Parliament) here. 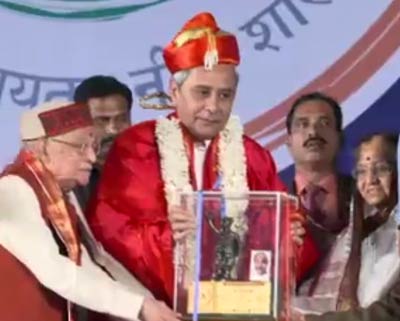 “Twenty years ago I was a political novice. I would have never imagined that I will be standing here as one of the longest serving Chief Ministers of the country”

“Today, I can say with conviction, that politics is not complicated. Politics is the most powerful instrument to bring about change in the lives of people. And so it follows that if people are kept at the core of your intentions, efforts and initiatives, then there is no complication,” he added.

“In public service, one keeps encountering these situations on a daily basis. Six months ago, we had to take a decision on urban slum dwellers. There was a choice between, continuing the practice of evictions and treating people as encroachers, resulting in lakhs of families living in fear and insecurity. Or recognising their immense contributions to the life of the city and providing them land rights,” he observed.

“Keeping people first ………..we chose the second option. A seemingly complicated situation always has a simple solution,” said Patnaik, while adding that this has been done for the first time in the country and they say it is path-breaking and historic.

Quoting Martin Luther King who had said ‘you cannot lead people unless you love them’, Patnaik said: “This to me is the other guiding political philosophy.”

“If you work for the love of people, even in the worst of natural disasters you aim for zero casualty…….and you end up setting global benchmarks.”

“If you love your people – you do not want anyone, without a roof over their heads. And you end up leading the country in rural housing.”

“If you love your people…..you will walk the extra mile to include the most vulnerable sections in your growth story ……… and you end up with the path-breaking initiative of setting up Tribal Development Councils.”

If you love your people, you don’t want hungry stomachs staring into the night. And you end up with the highest poverty reduction in the country.

If you love your people, you don’t fight for elections. You fight for change and transformation.

If you love your people…….with every intent, every step, every action, every signature, and with every breath, you will work for them,” he added.

“Long after you have breathed your last, you will still continue to live in the hearts of people, like Mahatma Gandhi and Biju Babu,” he told the gathering of youth from different parts of the country.

“Today, I am still a novice in politics. I just followed these two principles and the people of Odisha have showered their blessings on me continuously,” he added.

“I am single, with a loving family of four and half crore people,” said Patnaik, while referring to a short film that was screened at the venue before former President of India Pratibha Devisingh Patil conferred the award on him.

“More and more good people like you should join politics. And be part of the change you want to see. If you keep people at the forefront, it is not a political journey, it is a spiritual experience,” said Patnaik.