Odisha Channel Bureau Kendrapara, July 21: A team of technical experts has found anomalies in the slurry mixture components for the rupturing of geo-synthetic tube during its installation in sea-erosion-hit Pentha village in Odisha’s Kendrapara district. It may be recalled here that construction work of Odisha’s first geo-tube seawall project was suspended midway recently following alleged lopsided installation of synthetic tube. 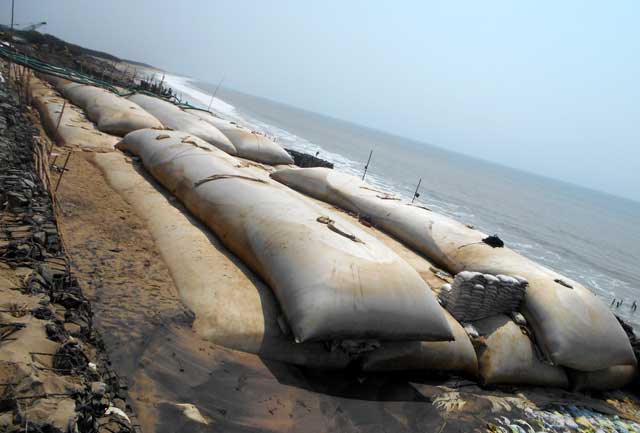 Following the fiasco, authorities had sought for technical expertise of Indian Institute of Technology, Chennai for hassle-free implementation of the project that is coming up to save vulnerable human settlements in Kendrapara district from marauding sea.A panel of experts from Indian Institute of Technology, Chennai inspected the construction site and conducted an on-the-spot morphological study of the installation spot.The experts were of the view that the thrusting of slurry of water and sand into the improvised tube was not done in accordance with prescribed ratio.As a result, one of tubes installed at the project site burst.The force applied during the thrusting of slurry also might not have been uniform leading to the rupture, said officials of saline embankment division here quoting experts’ findings. Samples of geo-synthetic materials have been sent to Union government-run testing laboratories to ascertain possible faulty designing of the tubes.We are also waiting for the final finding report from IIT Chennai before resuming the project work, officials told.As many as 40 geo-synthetic tubes made up of polypropylene materials have already been installed at the sea wall site.As one of the tubes ruptured during the course of installation, it has led to the suspension of the work, said Executive Engineer, Saline Embankment Division, Jugal Kishore Tripathy.240 geo-synthetic tubes are being spread across the sea wall which would of 505 metre length.The tubes are being spread in four-layer form.The height of the coastal embankment would be of 7.4 metre.Earlier, the project was to cover 700 metre length of shoreline.However, the sea wall’s length was brought down as natural sand dunes and sand bars have been formed providing a natural barrier to mighty sea waves.A high power committee of engineers headed by engineer-in-chief, water resources department had earlier inspected the construction site.The committee members had directed the suspension of construction work.The samples of geo-tubes have been sent to Bombay Textiles Research Association laboratory and Civil Engineering material testing laboratory of IIT Chennai.We are expecting to receive the technical test findings within next fortnight, said officials. Sand and water at the 80% and 20% ratio respectively are being pumped into the polypropylene tubes in slurry form.As per our findings, the tube might have ruptured as slurry was devoid of the required ratio of sand and water.Manufacturing defect might have also led to the rupturing of the tube, said officials.The Rs 31.4 crore worth sea wall project was scheduled for completion by July, 2015.However, deadline for completion of the project has now been rescheduled to December 31, 2015.