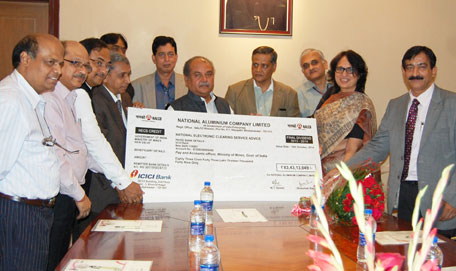 Odisha Channel Bureau Bhubaneswar, Nov 13: National Aluminium Company Limited (NALCO), the Navratna PSU under the Ministry of Mines, Government of India has declared a total dividend amount of Rs.386.59 crore (i.e.30 [per cent of the paid up capital) for the financial year 2013-14.This includes the Government of India’s share of Rs.313.23 crore, the company statement issued here.It may be noted that since inception that, NALCO has paid a total of Rs.4905.77 crore as dividend, including Rs.4233.96 crore as share of Government of India.Out of Rs.313.23 crore payable to Government of India, the company has already paid Rs.229.80 crore as interim dividend during March 2014.The cheque for final dividend amounting to Rs.83.43 crore was handed over to Union Minister of Mines and Steel Narendra Singh Tomar by Ansuman Das, CMD, NALCO, in New Delhi today, in the presence of Anup K.Pujari, IAS, Secretary, R.Sridharan, IAS, Additional Secretary, and other senior officials of the Ministry and Directors of the company.Meanwhile, the company has announced the results for the 2nd quarter ended September 2014.According to the reviewed financial results for the 2nd quarter of the financial year 2014-15 taken on record by the Board in the meeting held at New Delhi yesterday, NALCO has achieved higher net profit of Rs.342 crore, as against Rs.179 crore in corresponding quarter of previous fiscal, registering an increase of 91 per cent.